The Beijing Declaration and Platform for Action of 1995 (Beijing Platform for Action) is the most visionary agenda for the empowerment of women and girls, everywhere. Developed at the Fourth World Conference on Women in Beijing, China—known as the largest-ever gathering of gender equality advocates—the Beijing Platform for Action was adopted by 189 governments committed to taking strategic, bold action in 12 critical areas of concern: poverty, education and training, health, violence, armed conflict, economy, power and decision-making, institutional mechanisms, human rights, media, environment, and the girl child.

In 2020, it will be 25 years since the Beijing Platform for Action set out how to remove the systemic barriers that hold women back from equal participation in all areas of life, whether in public or in private. Despite some progress, real change has been agonizingly slow for the majority of women and girls in the world. Today, not a single country can claim to have achieved gender equality. Multiple obstacles remain unchanged in law and in culture. As a result, women remain undervalued, they continue to work more, earn less, have fewer choices, and experience multiple forms of violence at home and in public spaces.

UN Women stands at the centre of mobilizing governments and civil societies to keep the promises of the Beijing Platform for Action to all of society. In everything it does, it is committed to making gender equality a lived reality for all women and girls who have historically been marginalized and who have waited long enough. This is a vision of a more prosperous, peaceful and fair world that is ultimately better for both women and men alike. 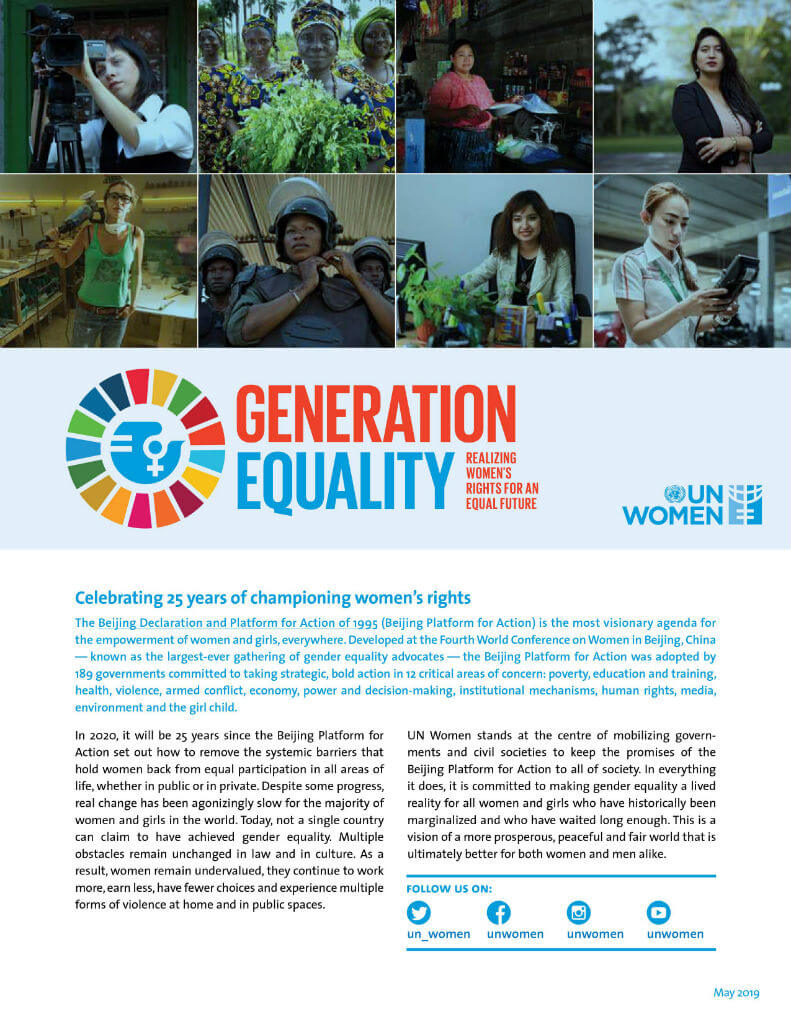 In today’s world, both women and men—and girls and boys—all over the world are speaking up for themselves and for those who have been silenced, stigmatized, and shamed for far too long. Many are from a new generation. They are seizing the moment to reimagine economies, societies, and political systems so that they uphold human rights and achieve gender equality, leaving no one behind.

UN Women is bringing together the next generations of women’s rights activists with the gender equality advocates and visionaries who were instrumental in creating the Beijing Platform for Action more than two decades ago. Collectively, these change makers of all ages and genders can tackle the unfinished business of empowering women through a new, groundbreaking, multigenerational campaign: “Generation Equality: Realizing women’s rights for an equal future”.

The Generation Equality campaign demands equal pay, equal sharing of unpaid care and domestic work, an end to sexual harassment and all forms of violence against women and girls, health-care services that respond to their needs, and their equal participation in political life and decision-making in all areas of life.

A series of galvanizing moments

The 25th anniversary commemoration of the Beijing Declaration and Platform for Action in 2020 is a rallying point to insist on finally achieving the human rights of all women and girls and will be organized as a global mobilization.

Throughout the year, UN Women will build on other galvanizing moments in the 21st century women’s rights movement:

See also the page on the 64th session of the Commission on the Status of Women, which will focus on the review and appraisal of the implementation of the Beijing Declaration and Platform for Action and the outcomes of the 23rd special session of the General Assembly.