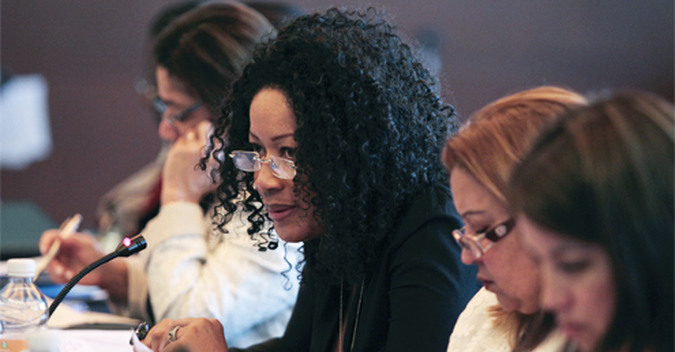 Investing in the economic empowerment of women directly contributes to gender equality, poverty eradication and inclusive economic growth. Women contribute very significantly to the economies, whether in businesses, farms, as entrepreneurs or employed working as domestic unpaid carers.

On the other hand, women continue to suffer disproportionately from poverty, discrimination and exploitation. Gender discrimination means that women often end up performing unsafe and poorly paid jobs, and remain a small minority in leadership positions. Discrimination also reduces access to economic assets such as land and loans and limits their participation in the design of social and economic policies. Another aspect to consider is that the bulk of the housework falls on women, so often have little time to take advantage of economic opportunities.

UN Women's vision for economic empowerment is based on three basic criteria and are firmly rooted in the realization of economic rights of women: transformation, participation and impact. Women must be able to transform their own lives and their communities and societies and markets or economic activities in which they participate, they have to participate in the processes and areas that affect their economic independence (labor market, markets products and services and such global markets) linkages, and they must be able to make an impact in their homes, in thir community and on legislation and policies (including public budgets) that affect their economical independence. In addition, economic empowerment is related to the elimination of violence against women and political participation since these three major areas of work of UN Women are inter related.

Latin America and the Caribbean

Cultural attitudes and norms related to traditional gender roles and stereotypes, continue creating significant challenges to achieve and enforce the rights of women in the region. Since 1999, rates of poverty and extreme poverty among rural women, have increased in all countries of the region, and the scourge of poverty is 1.15 times bigger in women than in men.

Furthermore, although women now have an enrollment rate in larger school systems than men, this does not reflect equally in access to paid work, especially decent work. However, most people are still illiterate women. The labor force participation of women in the region does not grow equally compared to men, one in three women do not get their own income, compared with 11.7 % of men. In addition, 90 % of paid domestic work is not yet done by women.

Men earn more than women at any age, level of education or type of work. As for women doing paid work, 58 % work in the informal sector and poor social security with limited access, and 14 of 100 women are in the domestic work sector, which still constitutes the most important occupation for women in Latin America.

This lack of economical empowerment, along with widespread gender discrimination and reinforcing traditional stereotypes affect the ability of women in Latin America and the Caribbean to participate equally in all aspects of public and private life, gain respect their rights, achieve free access to justice and to live dignified lives.

Various international commitments support the economic empowerment of women , including the Beijing Platform for Action, the Convention on the Elimination of All Forms of Discrimination against Women and various conventions on gender equality of the International Labour Organization. UN Women supports the economic empowerment of women based on these commitments, as well as the evidence increasingly large, which shows that gender equality contributes significantly to boost economies and sustainable development.

By working in conjunction with several partners, the programs promote the ability of women to secure decent jobs, build assets and influence public policies and institutions that determine growth and development. A key aspect of interest is in promoting the unpaid work performed by women as caregivers and take action to ensure that women and men are more willing / os to combine these tasks with paid employment and of the State to provide quantified adequate services and infrastructure given the increase in female-headed households.

In all our economic empowerment programs, UN Women caters to women who need it most, often in collaboration with civil society and grassroots. Among the especially marginalized rural women, domestic workers, migrants and some women are underdeveloped skills. Our purpose is to ensure that these groups of women get decent work, higher incomes, better access to and control of resources and greater security, including protection from violence .

Investors for Equality
MELYT
Up one level
news

Government authorities highlight women's inclusion and economic empowerment as drivers of sustainable development.
Ministry of Interior and Public Security, Ministry of Women and Gender Equity, and UN Women signed an agreement on gender equality and public security.
Verónica González Bonet: "We are not all present if people with disabilities are excluded".
Latin American and Caribbean governments commit to advancing toward the care society
Pushing forward: Dismantling anti-LGBTIQ+ discrimination in Argentina
END_OF_DOCUMENT_TOKEN_TO_BE_REPLACED