Women in crisis — vulnerable to risk, vital to recovery

Pictured centre left: Nahimana Fainesi (Finess), 30, fled her native Burundi in July 2015 and has been living in the Lusenda refugee camp in Fizi, Democratic Republic of Congo, which is home to more than 16,000 refugees, the majority of which are women and girls. Photo: UN Women/Catianne Tijerina

Armed conflicts. Earthquakes and storms. Deadly disease outbreaks. Such crises destroy human lives and communities with striking regularity. Each year, they hit dozens of countries in every region of the world, sometimes with no warning at all. Women and girls are among those most vulnerable to the consequences — and most vital to recovering from them.

A crisis might seem like a situation where everyone suffers. But gender discrimination can make the risks worse for women and girls. They likely have fewer skills and assets to restore damaged homes and livelihoods, for instance. The loss of shelter can make them highly vulnerable to gender-based violence. Rates of girls dropping out of school or getting married too early may rise.

Despite these risks, women are not just “victims” of crises. They are among the people who bravely step forward first to help others. They mobilize their communities and care for their families, often singlehandedly.

Humanitarian assistance can be far more powerful when it reaches and empowers women. UN Women, the UN entity for Gender Equality and the Empowerment of Women, advocates actions that treat women as equal agents of recovery and that respond to their specific needs. As this series of photographs reveals, UN Women also demonstrates telling results on the ground in some of the world’s most acute emergencies. These are women’s stories of hardship and courage in the face of crisis. 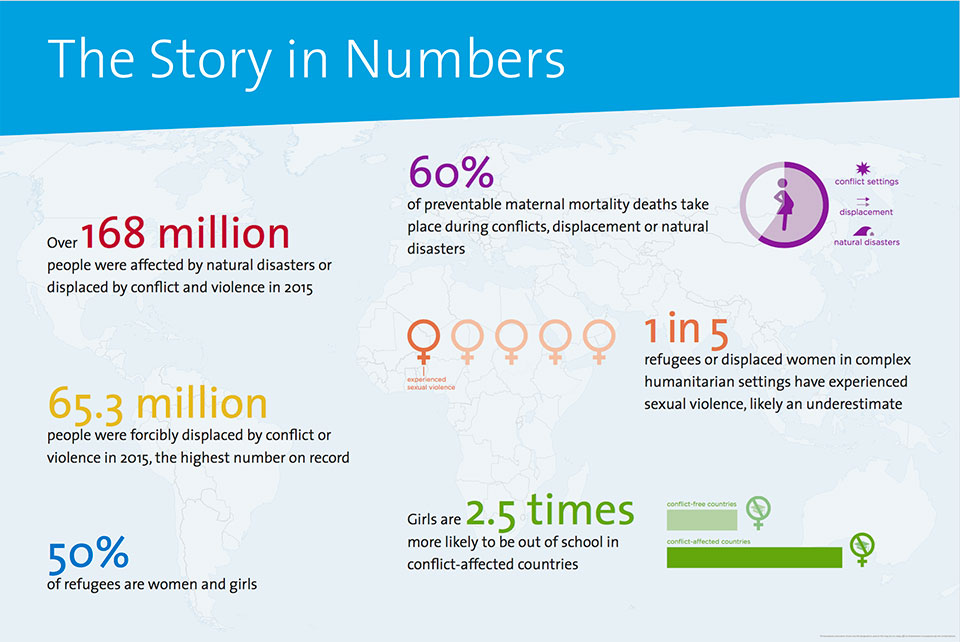 Promoting the Rights, Needs and Agency of Women and Girls in Humanitarian Action, UN Women, 2016

Having escaped the deadly conflict raging in their country, nearly 80,000 Syrians have sought shelter at Jordan’s biggest refugee camp, Za’atari.
UN Women manages a cash-for-work programme specifically targeted to women that is the largest of its kind. Three “Oases” safe spaces receive approximately 5,000 women and girls per month. They find opportunities to work or learn new skills, and a range of services, from day care to protection from gender-based violence. 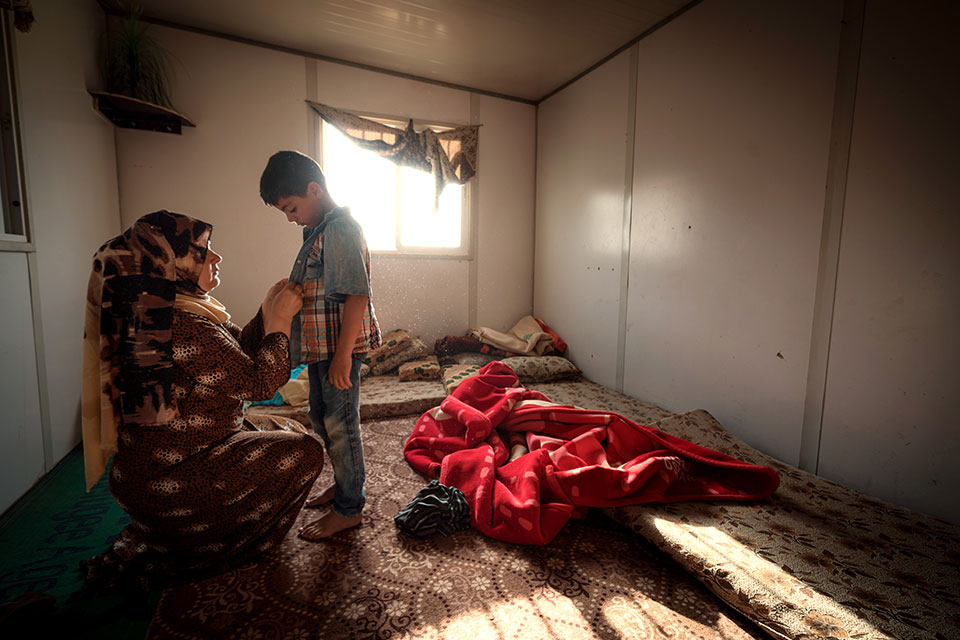 Insecurity in Syria uprooted Manal and her three children, who have lived in the Za’atari refugee camp since 2013. Under the cash-for-work programme, she teaches English to other refugees — women every morning, and girls and boys every afternoon. She supports her own family, while her students acquire skills that improve their prospects, now and for their future lives. 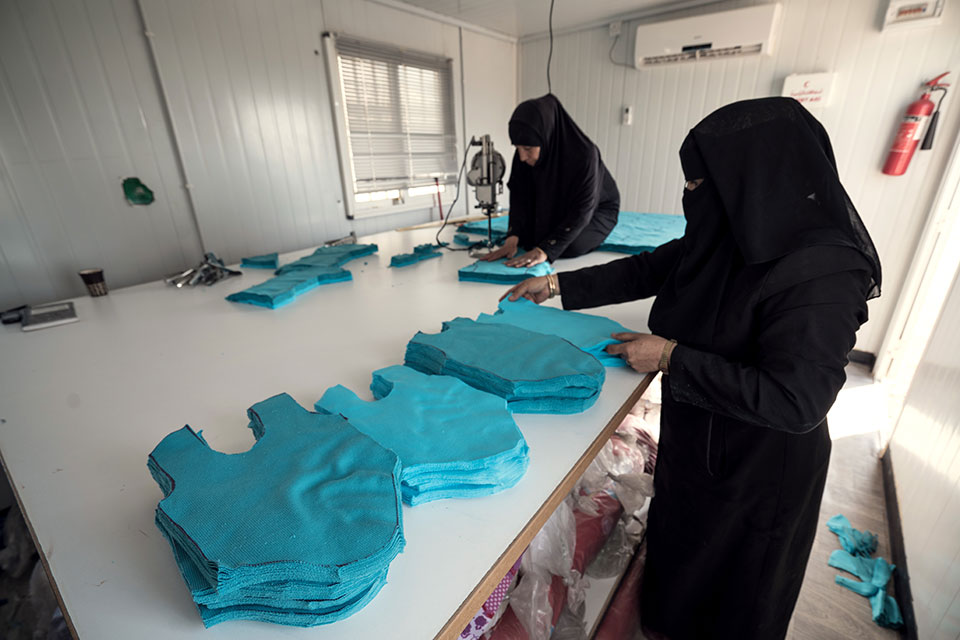 Fifty Syrian women tailors produce over 4,500 school uniforms and 1,000 maternal kits every year, which are distributed during immunization drives in the Za’atari camp. The money the women earn marks the first time many have ever received financial compensation. Signaling the far-reaching power of having an income, the camp’s cash-for-work programme for women has helped cut domestic violence rates by 20 per cent. 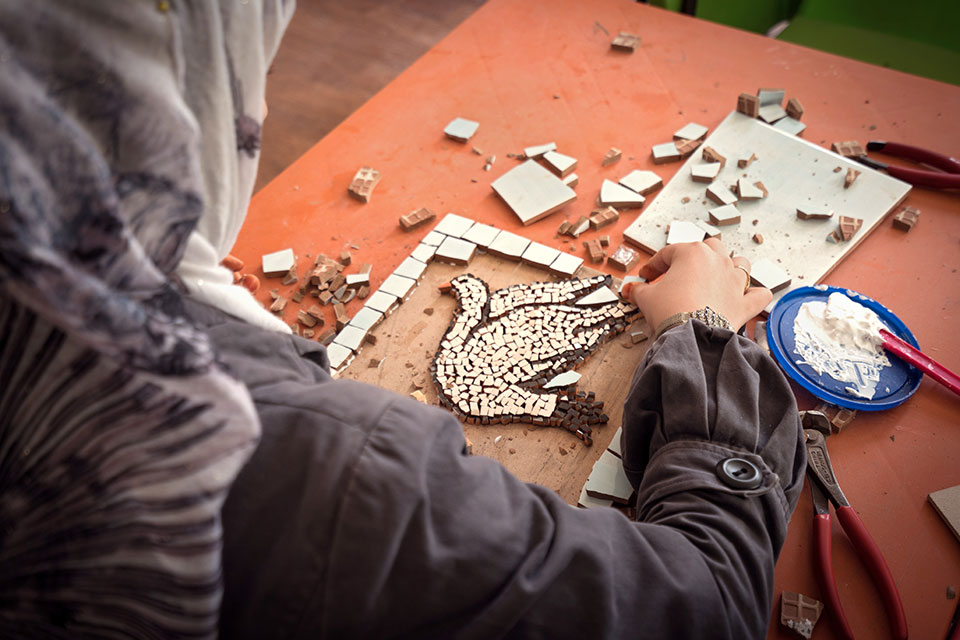 The “Oases” centres bring women together to break the isolation of camp life. They also offer space and supplies to develop livelihoods and meet basic household needs. Alaa’ produces beautiful tiled mosaics, building on a tradition she brought from Syria.

By 2016 violence in the Central African Republic had led nearly 250,000 people to ee across the border to Cameroon. In seven refugee camps, UN Women provides safe spaces and psychosocial support to help women heal from trauma. Business trainings equip them with skills to earn income and rebuild their lives. 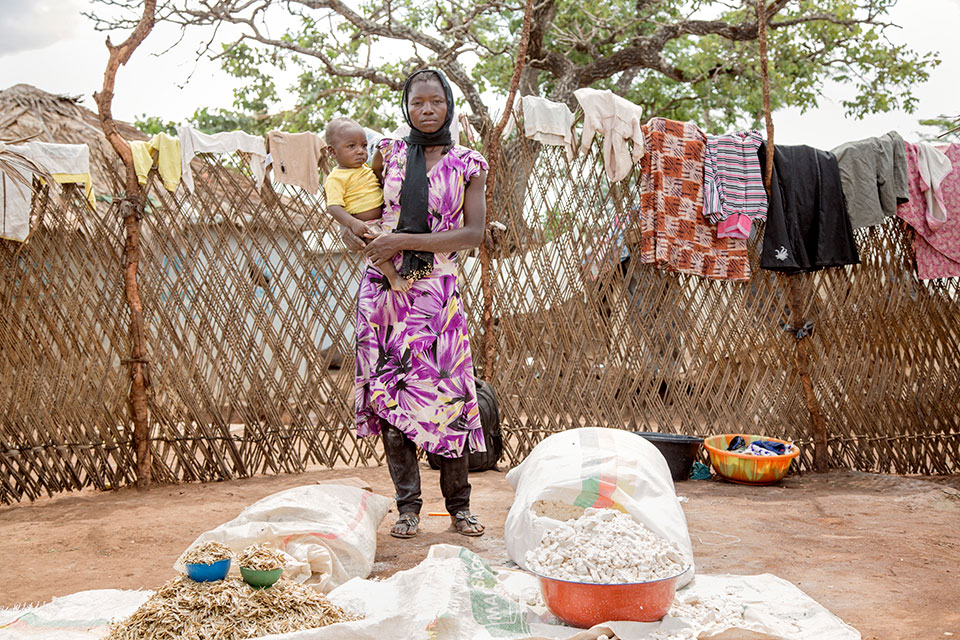 Hawa, 23, was eight months pregnant when her husband, father and brother were killed in the fighting in Central African Republic. Her mother disappeared. Hawa fled to Cameroon, where she gave birth to a son. “When I arrived I didn’t have anyone,” she said. Counselling and training helped her develop a small business selling goods such as cassava flour, dried fish and nuts at a camp market. 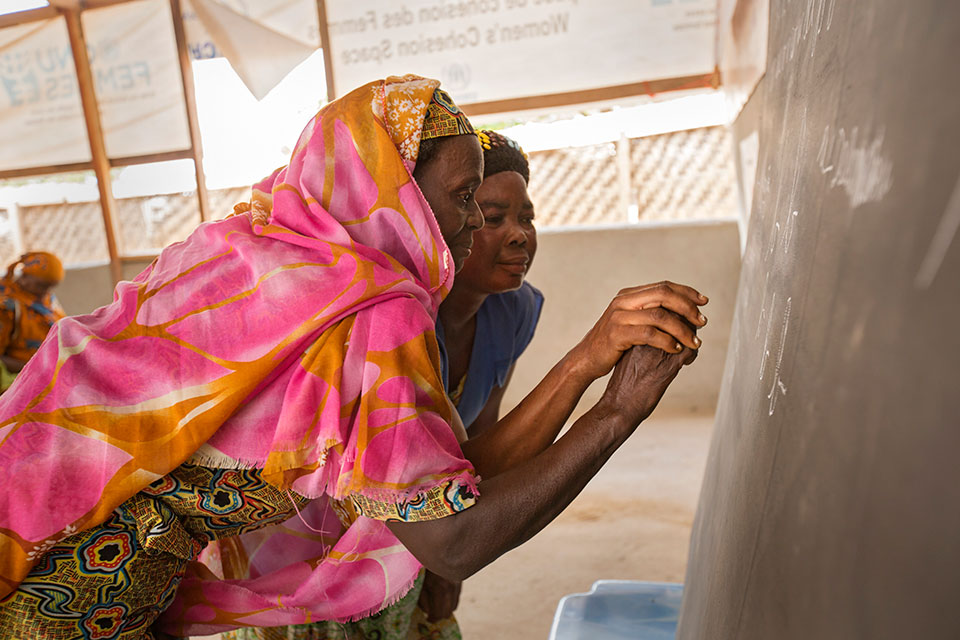 New skills can improve the prospects of women refugees and lend greater confidence. A women learning the French alphabet as part of an adult education class reflects the reality that women still lag behind men even in basic literacy. 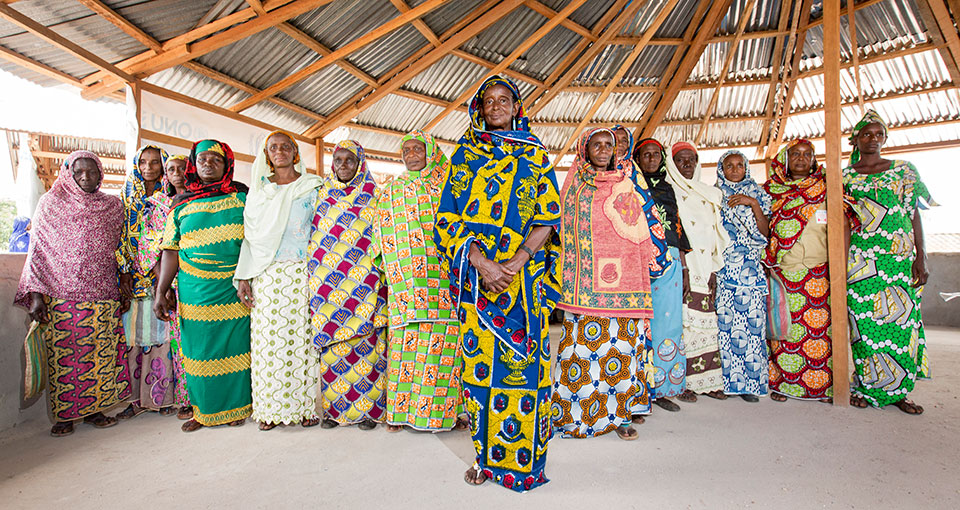 Ardo Djibo Fadimatou (centre), 64, lost eight of her 15 children to war. She does not know where her husband is. But personal tragedy has not stopped her from becoming an elected leader and spokesperson for over 12,000 women in the Gado refugee camp. “Women need to be educated, to have a chance to make an income and to lead in bringing their communities together,” she says.

A devastating earthquake struck Nepal in 2015, leaving behind death and massive destruction. More than 3.2 million women and children faced a long road to recovery from the disaster. Many turned to women’s centres created by UN Women to provide trauma counselling, legal and medical referrals, dignity kits for hygiene and even solar lamps. 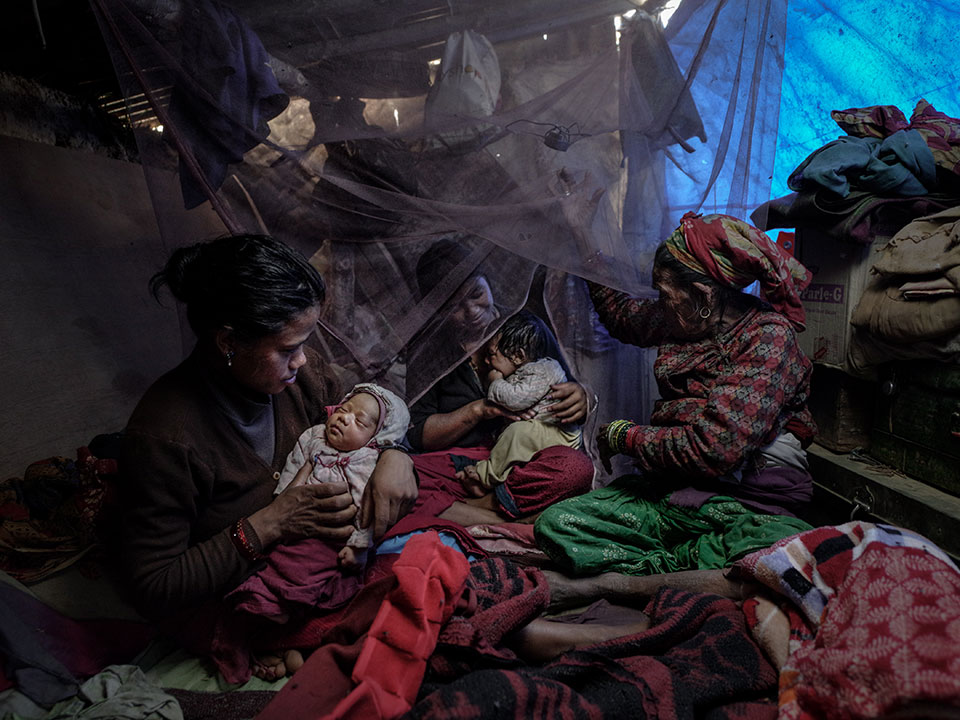 A natural disaster like the Nepal earthquake can leave women and children in desperate straits, with few resources to survive. Shanta (left) would normally be celebrating the birth of her new baby, but instead was crowded into a tiny temporary shelter with 12 family members. The quake destroyed their home and all belongings 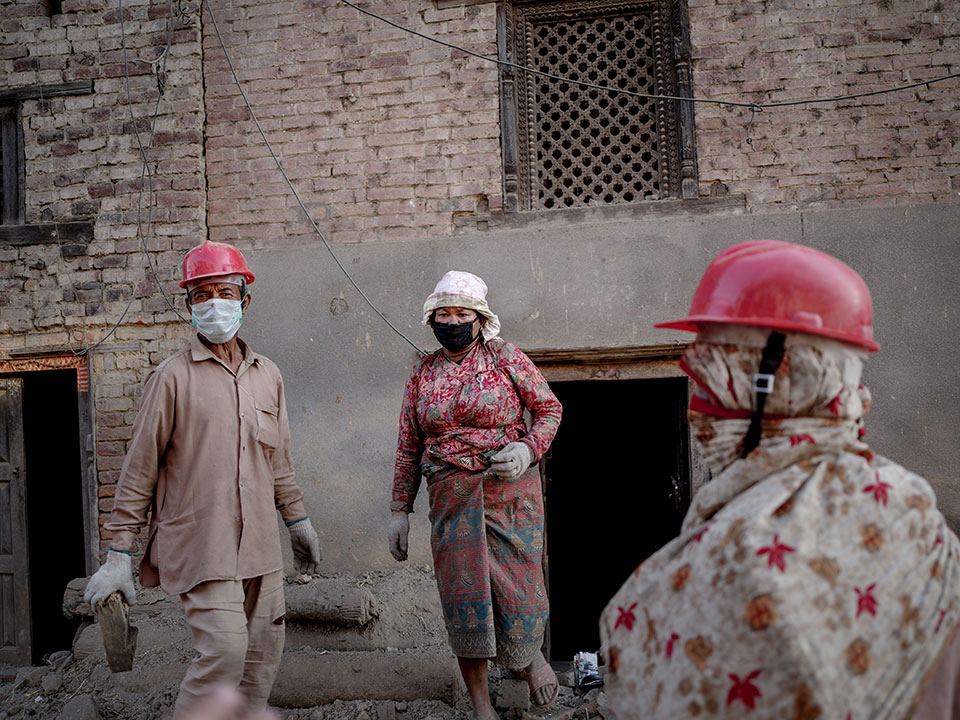 The home of Pungadevi Dangol, 49, was destroyed by the earthquake. Unbowed, she joined her husband and son in clearing the debris so they can start to rebuild. She was among the many women who took leadership roles, small and large, on the frontlines of recovery. 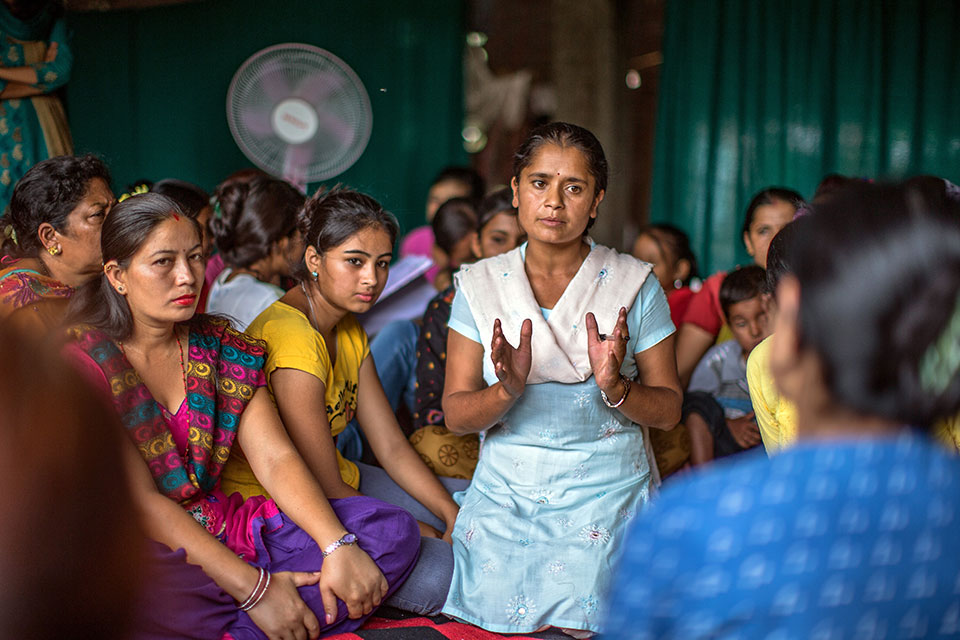 Social mobilizers like Rita Dhakal offered advice and an empathetic ear to earthquake survivors at special women’s centres. Among other issues, the centres responded to a dramatic post-quake increase in sexual and domestic violence. Displacement from their homes left many women living in tents, where they were vulnerable to abuse. Social mobilizers encouraged them to come to the centres so they could learn about their rights along with services to assist them.

Ongoing political turmoil in Burundi has caused hundreds of thousands of people to flee their homes and seek shelter in neighbouring Democratic Republic of the Congo. The Lusenda refugee camp is home to more than 16,000 refugees. The majority are women and girls. Safe Haven centres established by UN Women offer counselling, skills training and a place for women to feel that normal life will someday resume. 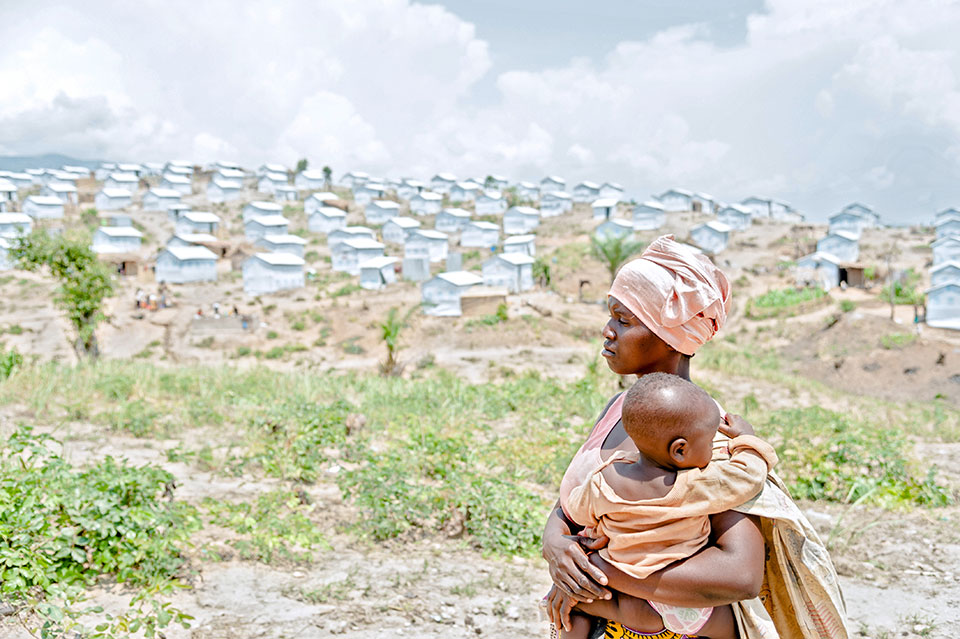 When her husband was arrested in Burundi, Luscie, 32, fled with her eight children, ending up at the Lusenda camp. There she learned to build fuel-conserving clay stoves that cut the costs of feeding her family. She also cultivates and sells vegetables. Her first goal: to make enough money to replace her children’s torn clothes. 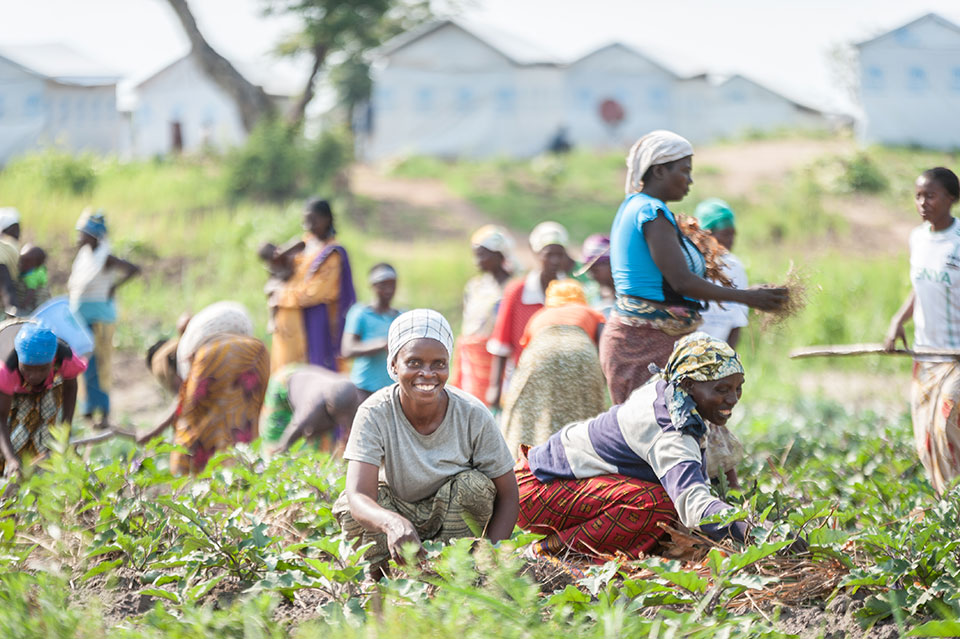 Women at the camp learn new agricultural skills to improve productivity and cultivate a variety of crops. This helps ensure a steady supply of nutritious food. 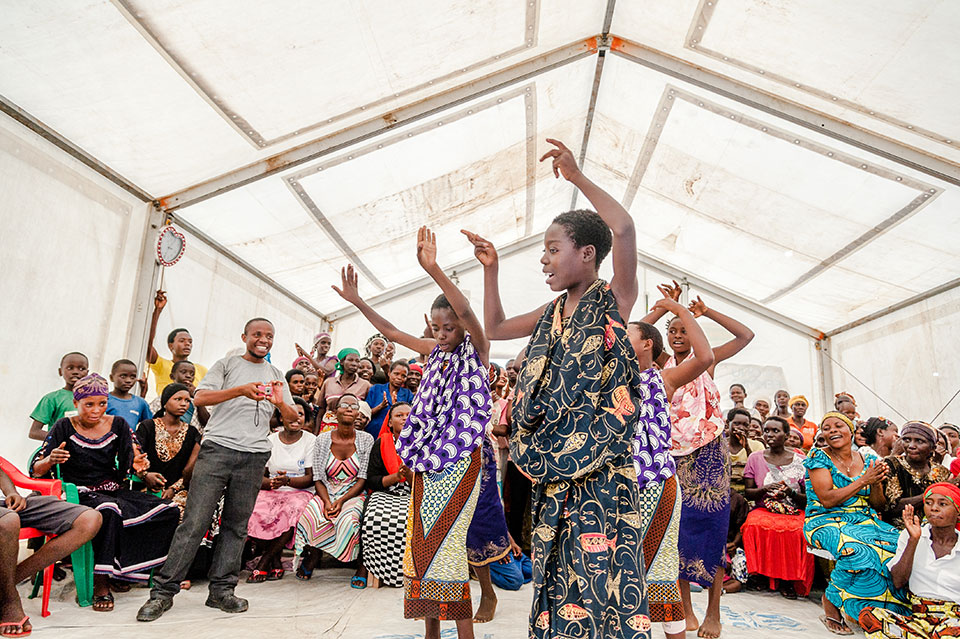 The Safe Haven centres offer space for women and girls to express themselves without the fear of judgement or harm. They can also find information on women’s rights, and receive psychological counselling. Many face acute risks of harassment, domestic abuse, and other types of sexual and gender-based violence. Celestine leads a dance performance organized by youth.

The 2014 Ebola outbreak in West Africa was the worst in history, claiming nearly 11,500 lives, and hitting particularly hard in Guinea, Liberia and Sierra Leone. Since women often bear the brunt of caring for sick family members, and can be isolated, with limited access to information, UN Women led a campaign that mobilized volunteers who fanned out across Sierra Leone’s eastern region
of Kailahun, one of the hardest-hit areas. This contributed to rapid progress; soon the spread of a deadly disease had come to a halt. 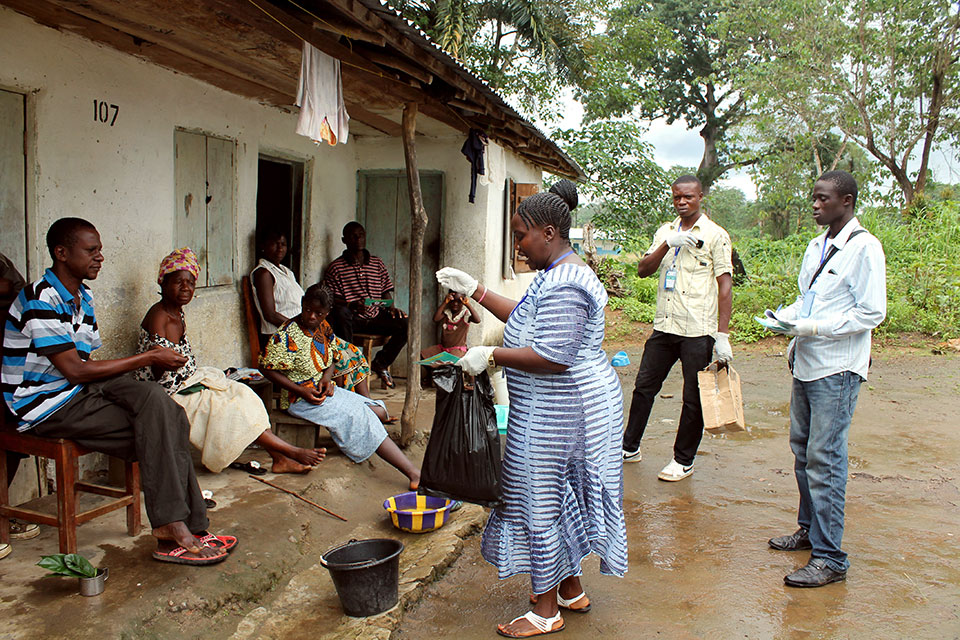 Campaign volunteers underwent intensive training to learn about preventing the spread of Ebola. A woman campaign volunteer gave a demonstration on proper handwashing. Many volunteers travelled over nearly impassable roads under heavy rains to reach even the most remote rural villages 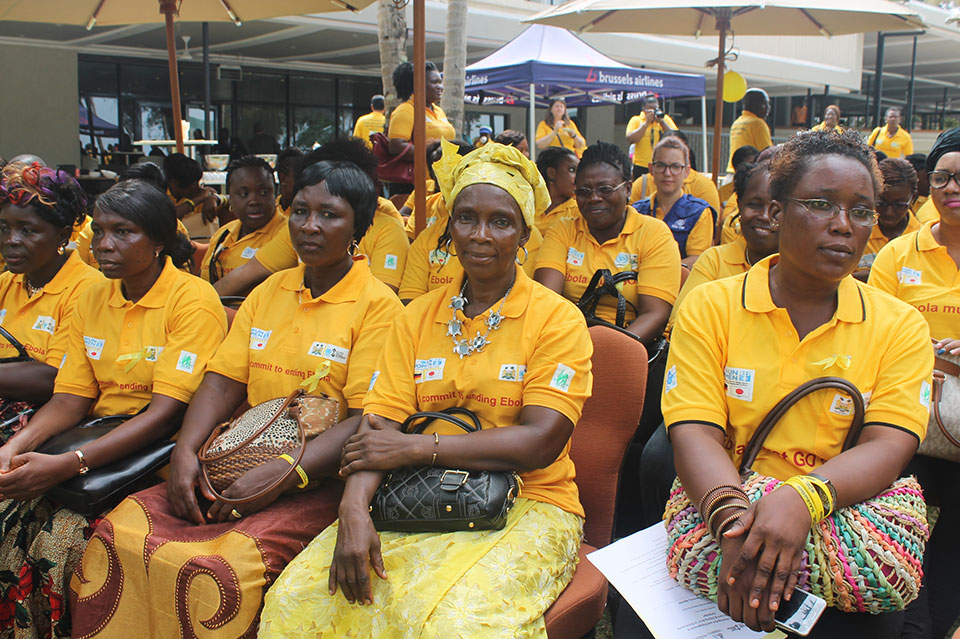 Information was among the most powerful tools in stopping the Ebola epidemic. The Ose-to-Ose Ebola Tok (Door-to-Door Campaign) mobilized nearly 29,000 young volunteers — cutting across all sectors, regions, religions, tribes and political lines. Women took leading roles. “I am doing this for the love of my country, because no amount of money can be compared to the risk involved,” said one female volunteer. 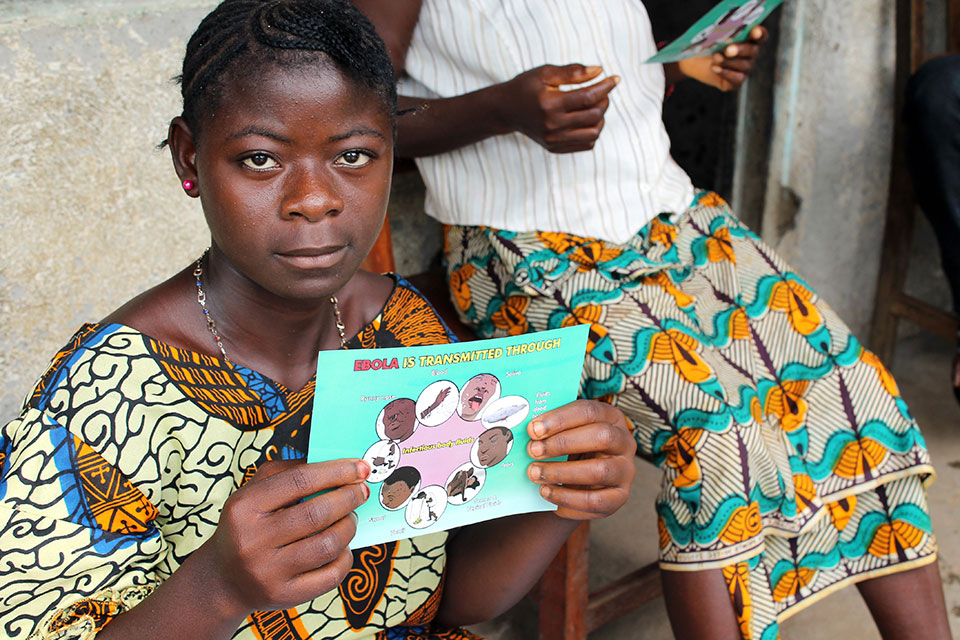 Ebola information cards used simple language and graphics, overcoming barriers related to knowledge and literacy, which are higher among women. The Association of Traditional Women Leaders, and women and youth clubs were among many groups that helped shape targeted public health messages to reach women — and influence behaviours to stop the virus in its tracks. The campaign reached over 1.5 million people and more than 80 per cent of households in Kailahun. For its efforts in leading efforts to reach out to women, including through activities across the UN system, UN Women received the Presidential Award from the Government of Sierra Leone.

"Preventing conflict means going back to basics — strengthening institutions and building resilient societies. It means putting respect for human rights at the center of national and international policy. It means protecting and empowering women and girls, one of the most important steps in sustainable development." — United Nations Secretary-General António Guterres

This exhibit, was on display in the Visitor’s Lobby at United Nations Headquarters in New York from 9 March to 16 April 2017, and was organized by UN Women with the support of the Government of Japan, which is also a generous contributor to UN Women’s humanitarian work, including most of the initiatives covered in this show.