Sepur Zarco: In pursuit of truth, justice, and now reparations 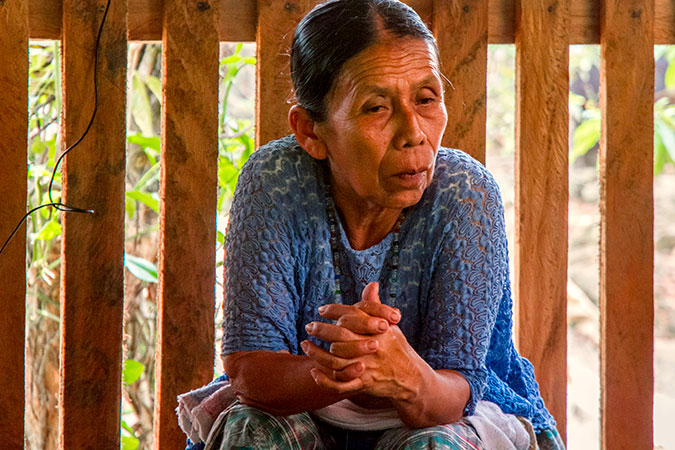 Demecia Yat de Xol was just 28 years old when she was forced into sexual slavery in the small village of Sepur Zarco by the Guatemalan military. On 26 February 2016, at age 61, Doña Demecia sat in Guatemala’s High-Risk Court, waiting for a verdict. She was accompanied by ten other survivors—respectfully referred as “the Sepur Zarco Grandmothers”.

Thirty-four years later and after 22 hearings, Judge Iris Yassmin Barrios Aguilar, President of the High-Risk Court of Guatemala announced the verdict that the 11 surviving Q’eqchi’ women would finally receive justice. The court convicted two former military officers of crimes against humanity on counts of rape, murder and slavery in Sepur Zarco. Esteelmer Reyes Girón and Heriberto Valdez Asij received a sentence of 120 years and 240 years in prison respectively. Importantly, the court ruled in addition, on reparations to be granted to the Sepur Zarco Grandmothers and to their communities as a whole. 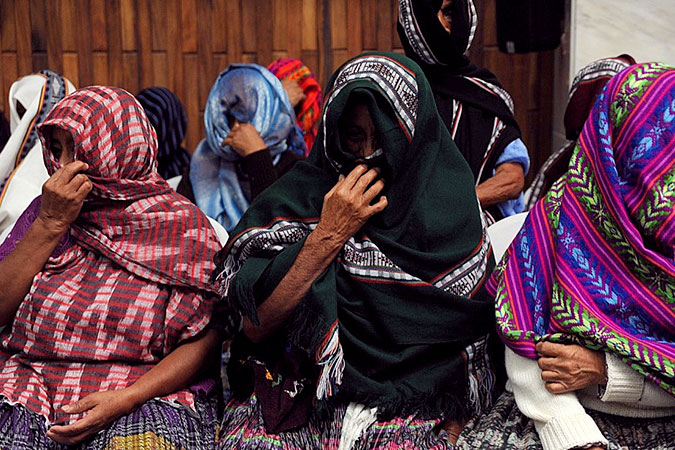 “The Sepur Zarco Grandmothers” wait for a verdict during the trial of former military officers for crimes against humanity on counts of rape, murder and slavery in Guatemala’s High-Risk Court. The plaintiffs kept their faces covered throughout the trial only to remove the shawls after the verdict. Photo: Cristina Chiquin

Against the backdrop of Guatemala’s 36-year-long conflict, which killed more than 200,000 people, mostly indigenous, the bucolic village of Sepur Zarco was the scene of systematic rape and exploitation of indigenous Q’eqchi’ women, from 1982 until 1988. The women of Sepur Zarco were used as domestic servants, raped and made to live in slave-like conditions by the Guatemalan military. Their husbands, who were claiming land, had been forcibly disappeared, detained or killed.

In her closing statement to the court, Doña Demecia, representing all the Sepur Zarco victims and survivors, thanked the judges and emphasized: “We have come to tell the truth and have said the truth. We have heard the accused do not want to accept what they have done, but we ask, where are our husbands then?” 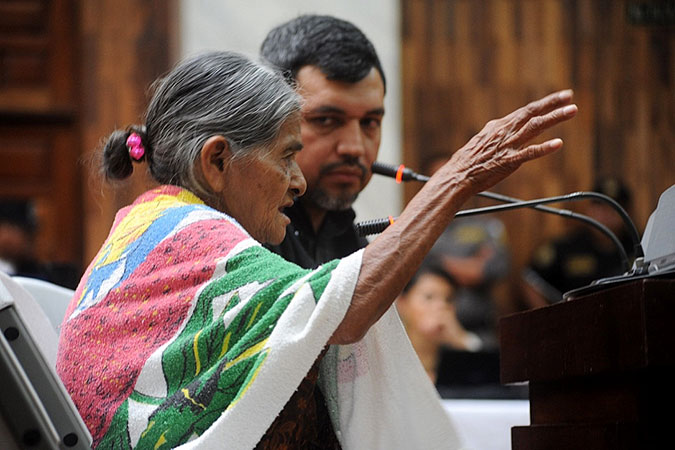 A woman testifies during the trial in Guatemala’s High-Risk Court in February 2016. Photo: Cristina Chiquin

Sepur Zarco was the first case of conflict-related sexual violence challenged under Guatemala’s penal code. It was also the first time that a national court anywhere in the world had ruled on charges of sexual slavery during an armed conflict—a crime under international law. In its path-breaking judgment, the Guatemalan court noted that sexual violence against indigenous Maya Q’eqchi’ women was part of a deliberate strategy by the Guatemalan army.

In a recent interview with UN Women, Judge Barrios Aguilar talks about the important role that justice sector actors play in ensuring peace: “I am convinced that peace can be achieved through justice. As judges, we need to be change agents within our society,” she says.

UN Women partnered with an alliance of civil society organizations—the Alliance Breaking Silence and Impunity (UNAMG-MTM-ECAP), , as well as with other women’s human rights defenders, national and international actors, including the Public Prosecutor and UN organizations, in supporting the survivors in their pursuit of truth, justice and reparation. 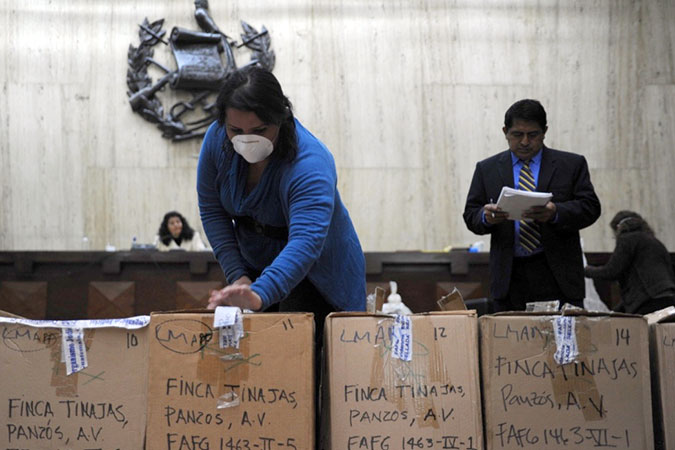 Reparations, the last step of justice

On 2 March 2016, the court issued a wide-ranging reparations decision that addressed past denials of the right to health, education and access to land that indigenous communities in Sepur Zarco had endured. The decision directs the Government of Guatemala to install a health centre in Sepur Zarco, improve primary school infrastructure, construct a secondary school and provide scholarships for women, girls and the entire community. It also asks the Government to reopen land restitution cases.

Paula Barrios from Mujeres Transformando el Mundo, (Women Transforming the World) an organization assisting the Sepur Zarco Grandmothers, is convinced that transformative reparation is the last step of justice, and critically important for survivors. “The Grandmothers have always stated that they are taking this path to justice not only for them, but to ensure that other women do not live through what they had to. That is the essence of transformative reparation,” says Paula Barrios. 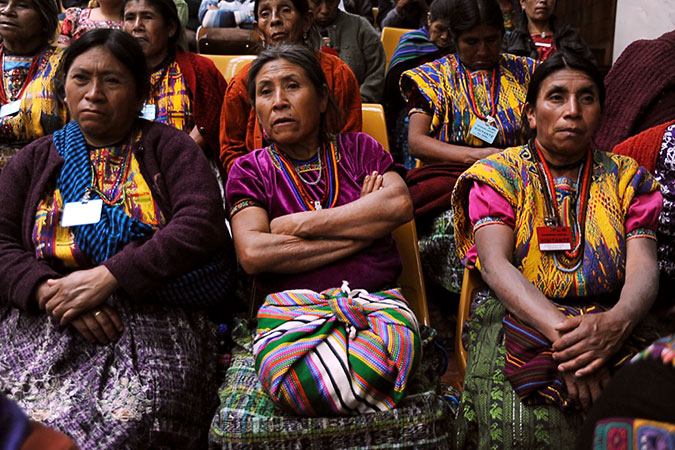 Women look on during the trial in Guatemala’s High-Risk Court in February 2016. Photo: Cristina Chiquin

More than a year since these historical decisions, the 11 surviving Sepur Zarco Grandmothers have created the Jalok U Association to promote the empowerment of women and girls from their communities. The Public Prosecutor has created a process to monitor and facilitate compliance of the reparation order, where all responsible State institutions participate. To respond to urgent health-care needs, and pending the construction of a permanent health centre, a mobile clinic was installed by the Ministry of Health; and the Ministry of Education is developing educational materials on the Sepur Zarco sentence. The organizations of the Alliance Breaking Silence and Impunity have also developed communication materials in the local language to raise community awareness about the sentence and to facilitate the implementation of the reparation order.

UN Women sees the Sepur Zarco sentence as a major step forward for indigenous women’s access to justice, an integral aspect of peacebuilding in Guatemala and in other countries. “The Sepur Zarco case shows how, by breaking the silence and pursuing justice, the Sepur Zarco Grandmothers are restituting their rights and those of their communities, and breaking the cycle of violence against women. They have shown what empowerment by women and for women looks like,” says Adriana Quiñones, UN Women Representative for Guatemala.

For justice to work, and peace to sustain, survivors must be able to define and experience justice.

With the support of the UN Peace Building Fund, and in partnership with national authorities, Guatemalan civil society and other UN agencies, UN Women is leading joint actions to develop local and national policies and reparation standards to fully implement the Sepur Zarco sentence.

Related News
19/10/2018
Sepur Zarco case: The Guatemalan women who rose for justice in a war-torn nation
20/02/2021
Women from Colombia and Guatemala share their experiences in the search for justice and peace building
01/11/2019
I am Generation Equality: Demecia Yat continues her search for justice
19/10/2020
From where I stand: “Forgiveness is still very far from our reality”
01/11/2019
Ten years on from mandate on sexual violence in conflict, survivors and experts call for promises to be fulfilled
END_OF_DOCUMENT_TOKEN_TO_BE_REPLACED