“No job is impossible for women”

Sixty-three-year-old Salomé Miranda is among the emerging group of women construction workers of La Paz, Bolivia. Miranda started working at age seven and received no schooling, like many other indigenous girls in her community. She survived an abusive marriage and with the help of the Association of Women Construction Workers, carved out a new life for herself and her children. Today, she dreams of building her own construction company. 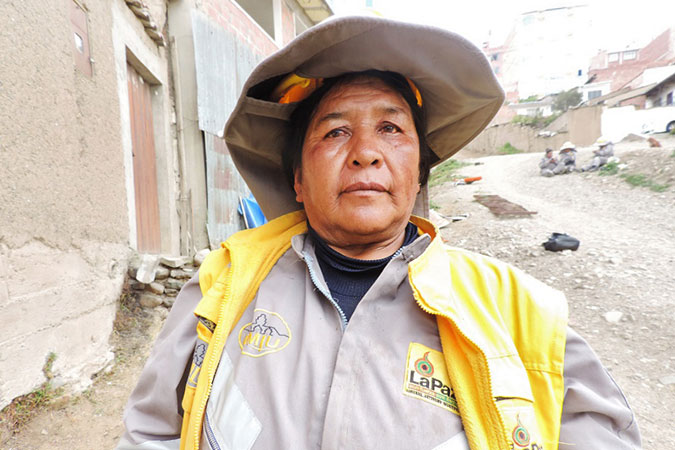 Salomé Miranda is sweating under the hot sun as she works on the banks of the Pasankeri River in the west of the city of La Paz, the capital of Bolivia. She wears a dusty overall, large boots and a construction helmet that covers her long braids. Miranda is part of a construction crew, which includes 467 women workers, many of them indigenous, repairing schools and building perimeter walls for the Municipal Government.

"I will go as far as my strength takes me and with time, I’ll build my own construction company," she says. As she speaks, her eyes sparkle, with her dreams, but her worn out hands and her firm voice betray her experience.

Data from the United Nations and the Bolivian Ministry of Labor and Social Security indicate that at least 848,000 children between the ages of 5 and 17 (28 percent of the population) are trapped in exploitative child labour; among them [1]. Salomé Miranda was one of them.

Miranda’s father had died before she was born and her mother abandoned her as a baby. She grew up with an aunt and started working at age seven. Going to school was not an option. While school attendance overall has improved in Bolivia in the recent years, indigenous girls still have much lower levels of schooling [2].

Shortly after Miranda turned 17, her aunt came home with a man who was 14 years older than her and said, "Salomé, you will marry this man. With him, you will never lack anything."

Miranda’s eyes fill with tears when she talks about her husband: "My life with him was a martyrdom. Every day, he hit me and because my eyes were swollen and bruised, I could not leave the house."

At age 18, she had her first pregnancy, and 13 more followed over the course of 24 years, including two miscarriages. Throughout her marriage, the beatings continued. "Once, he hit me so hard that he ripped one of my braids off. I fainted and he had to spill water on me to wake me up," she recalls. Gender-based violence is widespread in Bolivia, often leading to death. According to the Attorney General, Ramiro Guerrero, in 2016 the country registered 104 femicides [3] (gender-related killing of women).

The abuse continued until Miranda’s husband died in an accident. She migrated with her 12 children to La Paz and started looking for work. First, she managed to scrape by doing informal jobs. She washed clothes and sold soda and beer in the streets. After four years in La Paz, she managed to find a job as a construction worker for the municipal government. There she learned about the Association of Women Construction Workers. Funded by UN Women’s Fund for Gender Equality through RED HABITAT, the Association helps women construction workers learn new skills and stand up for their rights.

Miranda, along with over 450 other women, received training in painting, plumbing, coatings/insulations, tiling and remodeling. Now in La Paz, construction work—formerly perceived as a man’s job—is increasingly done by women who are specialized, trained and economically empowered.

Carolina Taborga, UN Women Representative in Bolivia, explains that "today, women are the backbone of Bolivia’s economy as construction workers, entrepreneurs and business-owners.” UN Women will soon implement two new projects in the Department of Chuquisaca, located in the south-central part of Bolivia, to expand economic opportunities for women through the production of non-timber, renewal products from the Amazonian rain forest.

[2] UNICEF, Situation of Children in Bolivia, Available from https://www.unicef.org/bolivia/spanish/children_13030.htm