Take five: “A feminist in decision-making roles makes a difference” 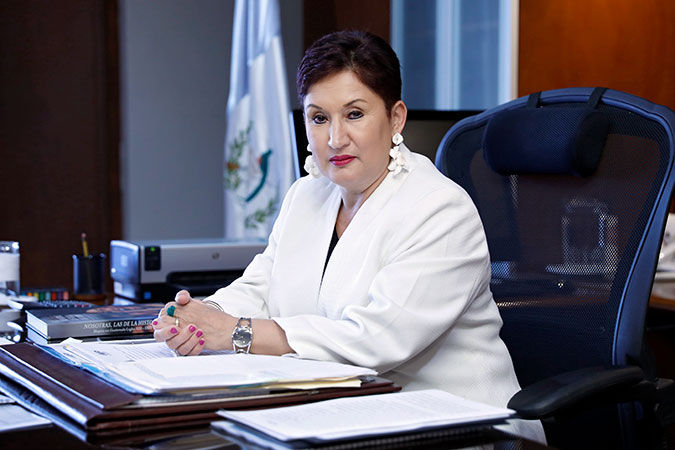 Thelma Aldana is the Public Prosecutor and Head of the Public Ministry of Guatemala, who will complete her term in May 2018. She is known as a champion of women’s rights, UN Security Council resolution 1325, and the force behind the creation of specialized courts for femicide and violence against women cases in 2010. Today, there are 12 of these specialized courts in Guatemala. UN Women has supported the Public Ministry in adopting and implementing the Women and Men´s Equality Policy and the joint strategy Public Ministry-Judiciary to increase access of women to justice, through measures such as, incorporating a gender and women’s rights perspective in criminal investigation and prosecution, including the application of the Latin American Model Investigation Protocol for gender-based killings of women (femicide/feminicide); strengthening of the Prosecutor Units on Human Rights, on Women, and against the Crime of Femicide; the use of new technologies for reporting and collecting evidence, and the strengthening of the referral networks for women survivors of violence. UN Women has also supported the investigation of the groundbreaking Sepur Zarco case.

You’re a champion of UN Security Council resolution 1325 in Guatemala. Why is the Women Peace and Security agenda important in Guatemala and what will it take to realize women’s full participation?

The UN Security Council resolution 1325 is very important for post-conflict countries such as Guatemala, because it allows us to keep in mind the history of the country, the grave violations of human rights its people faced during the internal armed conflict. The Guatemalan Government needs to improve the condition of women in the country. Fundamentally, achieving women’s full participation requires addressing the patriarchal culture and violence against women, which is entrenched. The President must use his executive power to design prevention policies and gender equality policies that promote and create the right conditions for participation of women and also promote access to a just society.

You led the creation of special courts for femicide cases. Why did you lead this effort and how do these courts work?

Before the law on femicide was passed in 2008, violence against women was considered a private matter, and the State would not interfere because it couldn’t intervene in family matters. When the law on femicide was adopted, the crime was identified as a specific form of violence, and violence against women was recognized in its physical, psychological, economic and sexual [manifestations], with femicide being the ultimate expression of that violence.

However, the patriarchal attitude of tolerance of violence permeated throughout the society and institutions. For example, judges gave more importance to cases of theft of a chicken, than cases of violence against women and girls. Back in the days, a woman would come to the police to present a case, and in some cases, she was raped by the police. In the courts, the judges would say, ‘go back to your husband, attend to your husband, this is why you were beaten’.

The two infamous cases in Guatemala—Claudina Isabel Velásquez Paiz v. Guatemala and María Isabel Veliz Franco v. Guatemala—that were tried in the Inter-American Court of Human Rights in 2014, found the Guatemalan State guilty of having failed to properly investigate the murder of the teenage girls. The investigators had failed to respond on time, and questioned the way the girls were dressed and why they were out so late. These cases further exposed the culture of patriarchy and violence against women in the Guatemalan society, and the sentences allowed me to guide the creation of the specialized courts on femicide and other forms of violence against women, and a special femicide unit within the Fiscalía contra el Delito de Femicidio (office of the special prosecutor against the crime of femicide).

The specialized courts address the cases of violence against women appropriately. They address cases of physical, psychological and sexual violence against women. Now women can come to the Public Prosecutor’s office to present their cases. They are received by trained professionals and there is a system of comprehensive assistance in place, 24 hours a day—from collecting their report, investigating the case, to psychologists and social workers, and on-site medical examinations. There’s a specialized forensic team as well. Last year more than 59,000 women came to seek assistance, and the year before, 56,000.

Guatemala has made history with the Sepur Zarco sentence. Why are reparations important for peace building and what would you recommend for the sentence to be implemented?

This case, Sepur Zarco, was initiated during my administration. We were supported by UN Women and other partners in working on the case. I decided to lead the case as a case of crimes against humanity during the internal armed conflict, and to emphasize the sexual slavery that the women of Sepur Zarco had faced. Now we have a sentence with 90 and 219 years of imprisonment for the perpetrations and 18 reparation measures.

This case sets a precedent. The victim reparation measures are fundamental, because alongside condemning the impunity of our past and recognizing the courage of the women who broke their silence and denounced this crime, the damage they endured must be compensated. It’s important that the State institutions involved in the reparations comply, but it’s also important that women’s organizations, UN Women and the international community accompany the implementation process.

Guatemala has been selected as one of the countries to implement the groundbreaking EU-UN Spotlight Initiative to tackle violence against women. Do you think Spotlight would make a difference in Guatemala, and how?

This is still a country of patriarchal culture and a culture of violence against women. The Spotlight Initiative can make a fundamental difference by targeting prevention of violence against women and girls and by focusing on combating femicide in the country. For this to happen, education is key for justice operators, women’s organizations, the media, and for lawyers, both men and women. The Spotlight Initiative can support the coordination among various institutions to promote the gender equality perspective.

You are a self-proclaimed feminist. Does a feminist make a difference in decision-making positions?

I am totally convinced that a feminist in decision-making roles makes a difference. In the Public Prosecutor’s Office, my feminist vision has allowed me to create spaces to improve women’s access to justice and implement an action plan which links institutional policy with equality between men and women, which was created with the support of UN Women. This office is the only State institution that has achieved gender parity.