Mexico, a global leader in gender statistics. Of 232 global indicators for monitoring the progress and the implementation of the 2030 Agenda and SDGs, only 54 are gender responsive. Only 13% of countries in the world allocate budgets for the collection of gender statistics; and only 15% of countries have legislations for the conduction of surveys focusing on gender. The Centre will be coordinated by UN Women and INEGI, and will work on the analysis and production of gender-responsive statistics at the global level. 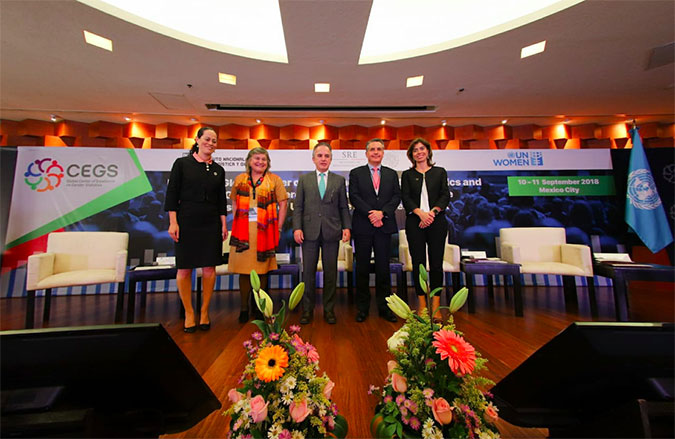 Coordinated by UN Women and INEGI in Mexico City, it will be a cutting-edge institution enabled by the United Nations’ international experience, UN Women’s global knowledge on gender statistics, and INEGI’s leading role in the generation of statistics in Latin America.

Ambassador Miguel Ruiz Cabañas, Undersecretary of Multilateral Affairs and Human Rights at the Secretariat of Foreign Affairs; María Noel Vaeza, Global Director of the Programme Division at UN Women; and Julio A. Santaella, President of INEGI, participated in the announcement of the Centre’s launch.

Participants agreed that some of the challenges to implement the 2030 Agenda are raising awareness among countries on the importance of allocating budget to the collection of gender statistics; managing that more countries produce regular statistical information on violence against women; and that more nations have legislations for the conduction of surveys that focus on gender.

The latter poses great challenges, as only 41% of countries in the world regularly produce statistical information on violence against women; only 13% allocate specific budget for the collection of gender statistics; and only 15% have a legislation for the conduction of surveys focused on gender.

In her participation, María Noel Vaez congratulated and acknowledged INEGI for the establishment of the Centre within the framework of international and national agreements signed with both the United Nations and the Mexican Government.

Additionally, she presented the objectives of the CEGS, and mentioned the importance of partners, donors, and strategic partnerships so that Mexico continues to be a world reference in the generation of gender-responsive statistics, and in order to have information that improves the lives of women and girls globally.

In turn, Julio A. Santaella, President of INEGI, restated his commitment to the generation of gender-sensitive information, and to collaborate with the participating institutions in order to bring the attention to the 2030 Agenda and its Sustainable Development Goals (SDGs).

Miguel Ruiz Cabañas, Undersecretary for Multilateral Affairs and Human Rights at the Secretariat of Foreign Affairs, underlined the momentum Mexico has brought to the field of gender statistics at the most important regional and multilateral forums –especially during all the negotiations derived from the 2030 Agenda–, as specific indicators and disaggregated data are key tools allowing to monitor, in parallel with the development agenda, progress made on women’s enjoyment of human rights.

In order for the CEGS to advance towards its objectives, it is fundamental to strengthen partnerships, investment, and collaboration among all the sectors involved, i.e. academia, public sector, private sector, civil society organizations, and stakeholder networks.

The Conference had the participation of representatives of UN Women, ECLAC, the International Labour Organization (ILO), the National Institute of Statistics of Italy, UNICEF, INEGI, and the Secretariat of Foreign Affairs, as well as lecturers and researchers from the University of Winnipeg and the National University of Australia, among others.

In her address, Luiza Carvalho, Regional Director of UN Women in Latin America and the Caribbean, stated the importance of having the first Statistics Centre in the world located in the region, and dedicated only and exclusively to the analysis and generation of gender-sensitive statistics. "The Centre is an excellent opportunity to create partnerships and establish strategic links with other world regions, and a way to leverage the extensive development and work originating in Latin America and the Caribbean through Mexico. UN Women reinforces its commitment at the regional level to function as a catalyst of associations between the Center and other stakeholders for the production of gender statistics in the region and the world," she concluded.

The launch of the CEGS takes place during the First Global Conference on Gender Equality and the Measurement of Unpaid Domestic and Care Work, which includes sessions and panel discussions focused on collecting indicators and information on unpaid domestic and care work aiming to strengthen policy making and care systems, and advance gender equality.

About the Global Center of Excellence on Gender Statistics

The CEGS is an initiative seeking to strengthen data generation, availability, analysis, and use, as well as the design of internationally comparable statistics for the achievement of gender equality

As a world advocate for women and girls, UN Women was established to accelerate the process of improving life conditions for women, and respond to their needs around the world