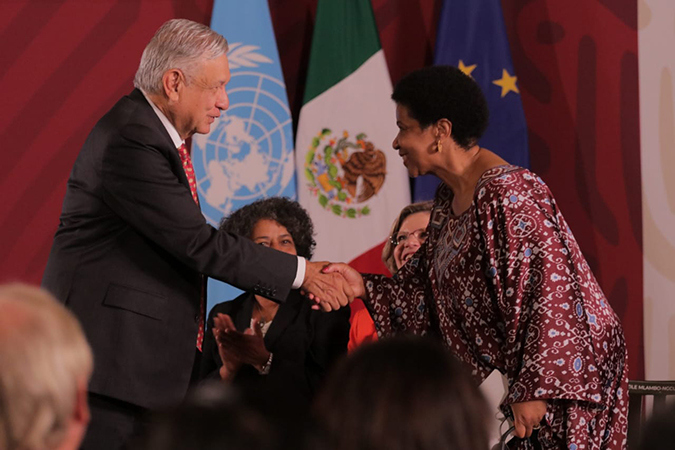 UN Women Executive Director Phumzile Mlambo-Ngcuka is visiting Mexico this week in order to attend the launch of the Spotlight Initiative, the Youth Leaders Forum, and the Women’s Forum Americas, to take place in Mexico City on 29 and 30 May.

On 29 May, the Executive Director attended the morning press conference of the Government of Mexico (popularly known as la mañanera, Spanish for “the early riser”), where she appeared together with Mexican President Andrés Manuel López Obrador; Stefano Manservisi, Director General for International Cooperation and Development of the European Commission; as well as federal government officials, to announce the launch of the Spotlight Initiative.

At the Conference, she acknowledged that Mexico is a leader in the advancement of women's rights, highlighted that the country has already achieved gender parity at the legislative level, also mentioning the recent constitutional amendment, and that it will now advance even further with the Spotlight Initiative. 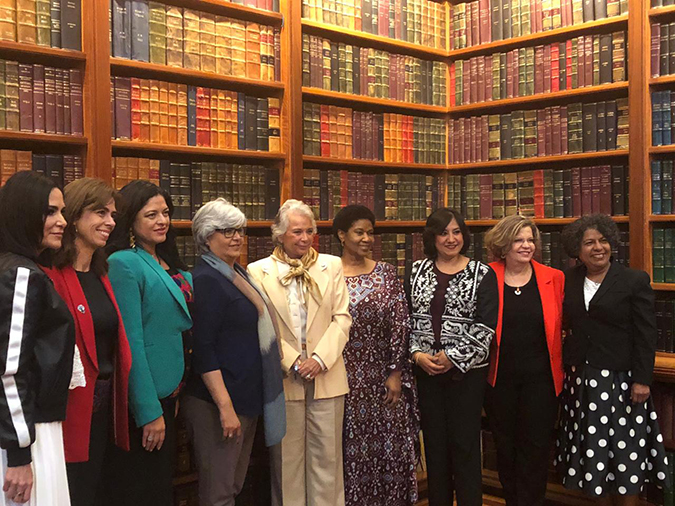 Later on, Ms. Mlambo-Ngcuka attended a breakfast with Secretaries of State and the UN Women Representative in Mexico, where they discussed the challenges of gender mainstreaming at all government levels. The Executive Director mentioned that UN Women is a small agency with a big mandate, and needs everyone's help. The Secretaries of State expressed their interest in collaborating on the issue of political participation, violence against women, economic empowerment, and, above all, peace and security within the framework of the National Guard. 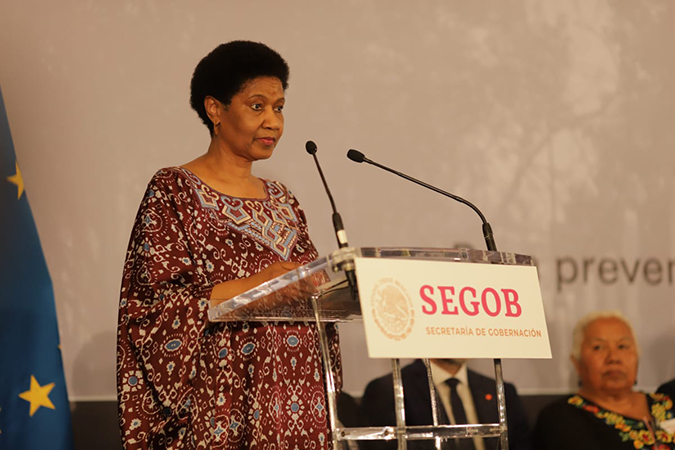 Phumzile Mlambo-Ngcuka at the launch of the Spotlight Initiative, hosted by the Secretariat of the Interior in Mexico City. UN Women/ Dzilam Méndez.

At the end of the event, the Spotlight Initiative was launched, where the European Union, the United Nations, and the Government of Mexico formalized the signing of the country programme document. The Spotlight Initiative aims to prevent and eliminate all forms of violence against women and girls, and in Mexico it will have a particular focus on feminicide. 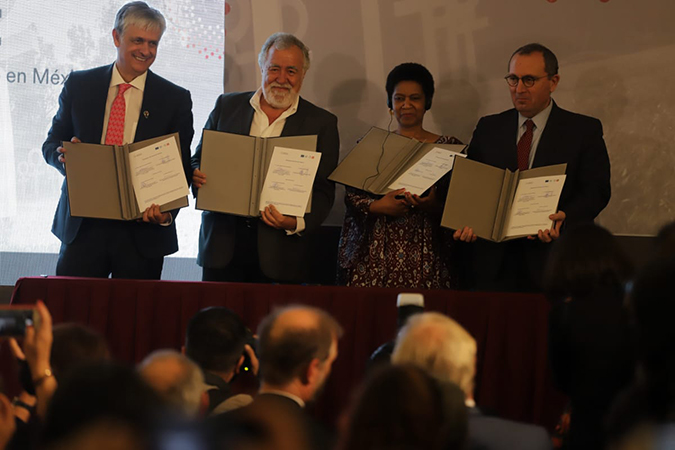 In her participation, Ms. Mlambo-Ngucka emphasized that feminicide is a prevailing global problem which becomes evident in hospital emergency rooms and clinics that treat women's wounds. She indicated that the most extreme form of violence is feminicide, that is, the death of a person just for the fact of being a woman, specifying that nine women are murdered in Mexico every day. 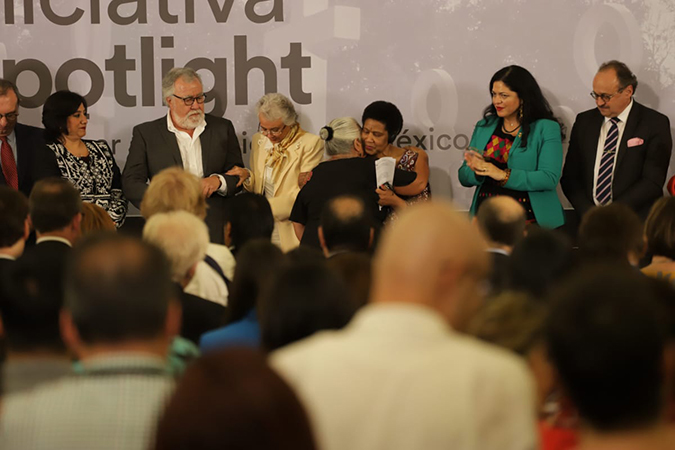 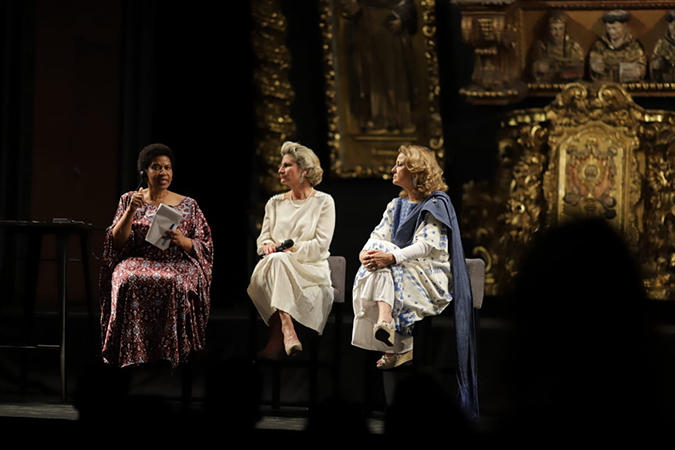 Phumzile Mlambo-Ngcuka; Carmen López Portillo, Rector of the University of the Cloister of Sor Juana; and Chiara Corazza, CEO of the Women's Forum for the Economy and Society. UN Women/ Dzilam Méndez

The Executive Director participated in the Youth Leaders Forum, held at the University of the Cloister of Sor Juana, as part of the Women's Forum Americas. During her participation, she shared some messages with a young audience about the Beijing Declaration and Platform of Action, of which the 25th anniversary will be celebrated in 2020. She highlighted the role of students and youth in achieving gender equality; some of the attendees belong to universities that have joined the HeForShe campaign, such as the National Autonomous University of Mexico, University of Jalisco, Ibero-American University, Autonomous Technological Institute of Mexico, Metropolitan Autonomous University, Monterrey Institute of Technology and Higher Education, and University of the Cloister of Sor Juana. 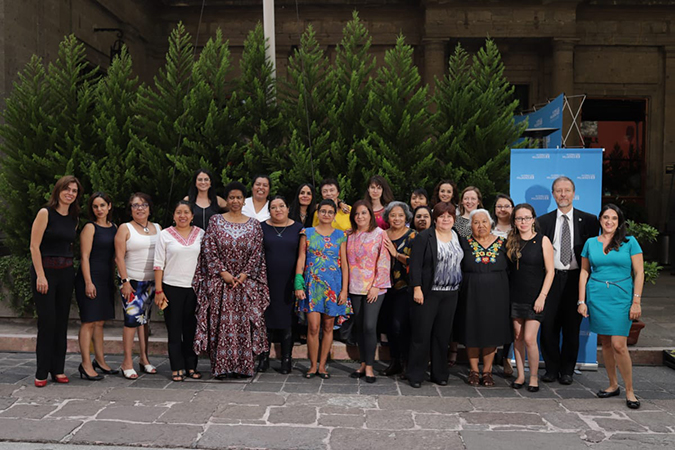 The Executive Director also had lunch with Jan Jařab, Representative of the Office of the United Nations High Commissioner for Human Rights in Mexico; women's groups; and civil society organizations advocating for the human rights of women and girls. During the meeting, compelling challenges Mexico faces in relation to women's human rights and gender equality were discussed, such as the increase in online violence against women and girls; the promotion of indigenous women's political participation; attacks against women’s rights advocates; the growing threat to sexual and reproductive rights by fundamentalist groups; and the impact of organized crime at all levels and forms of violence against women and girls.

In the face of these scenarios, Phumzile Mlambo-Ngcuka recognized that, “Stepping back is not an option. You have fought too much of a hard battle not to feel you have the strength to go on.”

She also noted that there are common challenges among the Latin American countries where the Spotlight Initiative is being implemented –Mexico, El Salvador, Honduras, Guatemala, and Argentina. "Civil society in the region needs to unite and identify broader links between violence against women and girls, the peace and security agenda, immigration, and the humanitarian crisis.”

Finally, the Executive Director mentioned the need for deeper dialogue and engagement between government and civil society, within the framework of Beijing+25 and the General Assembly. At the same time, she recognized Mexico's leadership in advancing the gender equality agenda and the empowerment of women in international negotiations, pointing out that "now, more than ever, is the time to bring out that leadership to prevent attacks like the current ones against women's rights”. 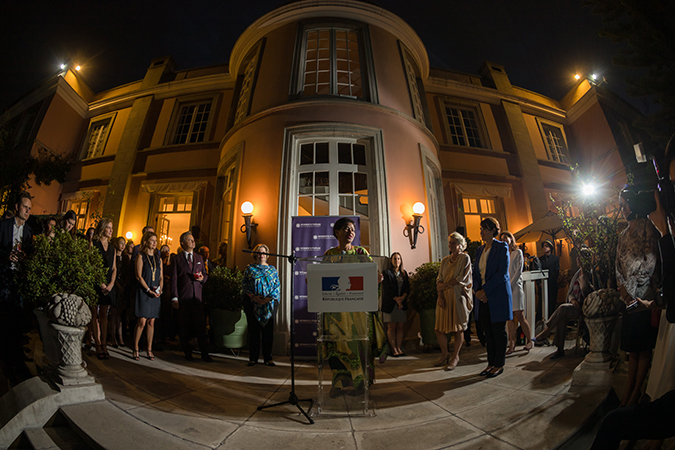 At the end of the day, she attended a reception at the residence of the French Embassy in the framework of the International Cooperation Bureau. During her visit, the Executive Director highlighted the fundamental role of embassies for the advancement of equality, and the importance of collaborating so that coming generations have a better world. She also referred to the great relationship with France and its forthcoming role as co-organizer of Beijing+25 next year. Finally, she pointed out that "it is not too much to ask for equal salaries and equal benefits for men and women in the world.” 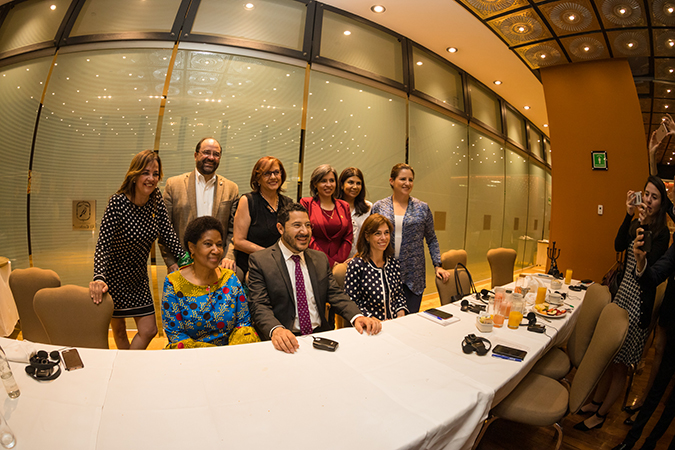 In the morning, Mrs. Phumzile Mlambo-Ngcuka met with federal legislators, accompanied by Mrs. Nadine Gasman, President of INMUJERES and Mrs. Belén Sanz, Representative of UN Women in Mexico; and Martí Batres, President of the Board of Directors of the Senate, to discuss the legislative progress in Mexico in relation to the rights of women and girls. Similarly, they analyzed pending issues on the legislative agenda.

The legislators described the process of presentation, negotiation, and approval of the recent draft constitutional reform in the area of gender parity. They also identified some of the main challenges to be addressed in the field of gender equality by the legislature, including economic empowerment, the creation of a care system, the strengthening of civil society organizations, and the eradication of all forms of violence against women and girls.

At the meeting, the Executive Director acknowledged Mexico's progress towards parity democracy, and urged legislators to work together to eliminate every discriminatory legislation. She highlighted Mexico's role in international negotiations on gender equality and the human rights of women and girls.

Finally, she presented the general framework of the Spotlight Initiative, and invited the legislative power to open communication channels to join the initiative and to put an end to violence against women and girls. 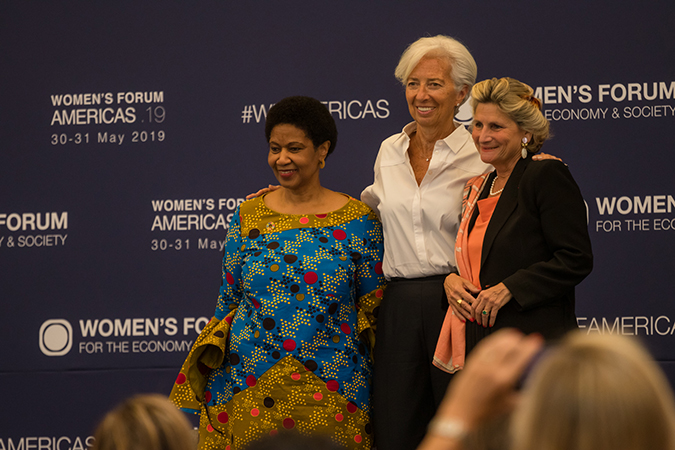 Subsequently, the Executive Director attended the Women's Forum America, held at the University of the Cloister of Sor Juana in Mexico City, where she noted that "75 percent of the world's legislators are men. The vision of women is not being considered, and that's something that needs to change”.

Our responsability is to lift as we rise

During her participation, she pointed out that women leaders also have the responsibility to promote the advancement of equality in paternity and maternity leave, equal care responsibilities, and took the opportunity to re-emphasize wage equality.

We need your support to build the narrative that protects the temporary special measures to change the situation of inequality."

This space, focused on highlighting women's leadership and their full participation in the world's societies and economies, also featured Christine Lagarde, who spoke of how to work together to end stereotypes and achieve cultural change for the better. 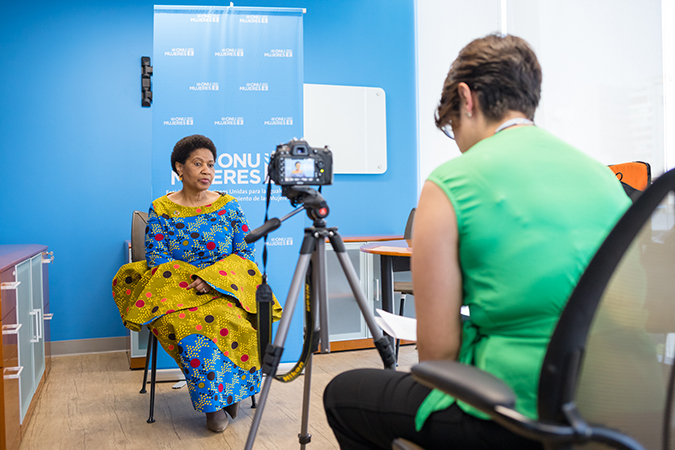 Ms. Phumzile Mlambo-Ngcuka met with the United Nations Information Centre (UNIC) Team to discuss the Spotlight Initiative in Mexico, promoted by the European Union and the United Nations. The Initiative will pay special attention to the access to justice and the fight against impunity as regards to violence against women and girls and feminicide, the strengthening of institutional and statistical monitoring mechanisms, and innovative models of violence prevention focused on key populations in the country.

She also commented that the HeForShe movement seeks to work with men and boys to involve them in gender equality advocacy and to promote a change in paradigms and social norms around toxic masculinities.

In relation to the upcoming Beijing+25 Global Forum, which Mexico will co-chair, she said that each country will present a report integrated by the contributions of their governments, civil society organizations, and academia in order to analyze existing equality gaps, what has been achieved, and what still needs to be done to generate a global report that allows to see progress in the world. "We have to aim for substantive equality," she stressed. 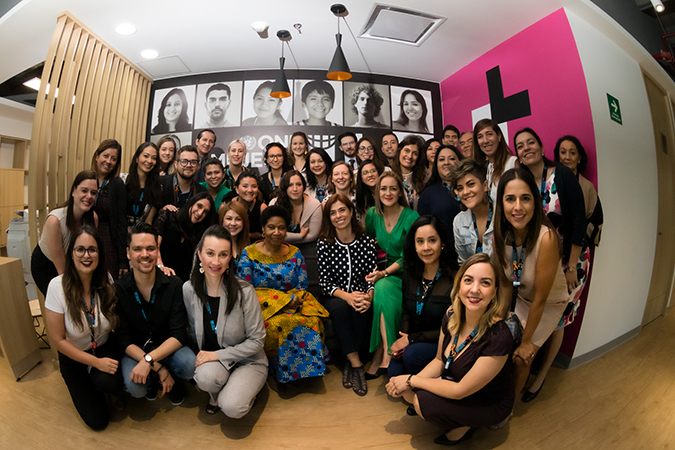 Before ending her visit, she met with the UN Women Mexico team. In this space, she spoke about the challenges faced concerning gender equality and the importance of the Bejing Declaration and Platform of Action, which has laid the groundwork for legislation that protect women's rights and the emergence of movements such as #MeToo.

"Before, you walked down the street and if someone pinched you, it was assumed to be your problem because you were a woman." She pointed out that in cases of harassment and/or sexual abuse, there are often power relations that do not allow the victims of this situation to denounce; therefore, it is equally important that those who see this, raise their voices. "It should not only be the responsibility of the victim to report it, but of all persons who are witnesses”.

She remarked that from the programs in which we work, it is possible to involve more actors, especially those who participate in the whole process of administering justice, with an emphasis on the police, who are the first point of contact.

Finally, she recognized the work currently done from the office in Mexico, and stressed the importance of continuing to work with rigor and quality.

Related News
29/11/2017
The long road to justice, prosecuting femicide in Mexico
16/03/2021
Women in leadership: Juana Facundo, breaking language barriers to respond to the COVID-19 pandemic in indigenous peoples
15/03/2021
Women in Leadership: Drivers of Transformative Change for Human Rights and Gender Equality
26/11/2020
UN calls for "zero tolerance" policies on violence against women and increased funding for women's organizations
05/11/2020
The pandemic’s impact due to COVID-19 on violence against women
END_OF_DOCUMENT_TOKEN_TO_BE_REPLACED