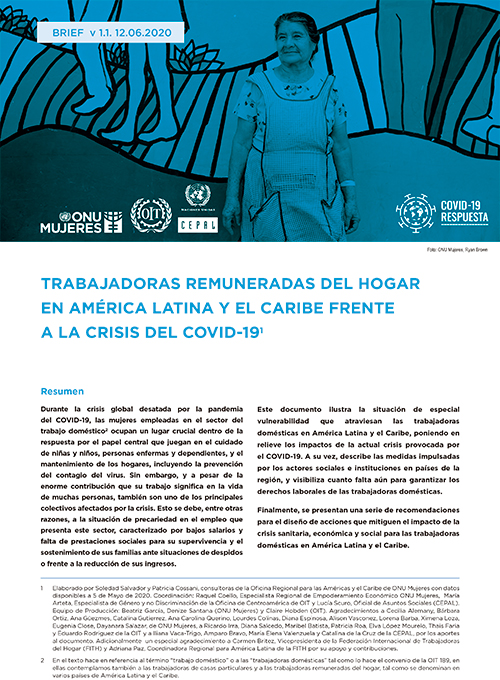 In Latin America and the Caribbean, between 11 and 18 million people are engaged in paid domestic work. 93% of these are women. Domestic work accounts for 14.3% and 10.5% of women's employment in the region. However, over 77.5% operate in the informal sector, which means that a significant proportion of them work in precarious conditions and without access to social protection. The income of women employed in domestic service is also equal to or less than 50% of the average for all employed persons.

The document presents the various measures adopted by social actors and institutions in countries in the region and shows how much remains to be done to guarantee the labour rights of domestic workers. It contains a series of recommendations for the design of actions to mitigate the impact of the health, economic, and social crisis on domestic workers in Latin America and the Caribbean.

"This crisis has exacerbated inequalities and previous systemic crises and has significant impacts on domestic workers in particular. States must recognize and protect their rights so that no one is left behind. We have to enable dialogues and consider their trade unions' proposals as part of the responses to the crisis and strategies for socio-economic recovery promoted by governments as well as regional and international financial institutions," said Maria Noel Vaeza, UN Women's Regional Director for the Americas and the Caribbean.

The ILO Director for Latin America and the Caribbean, Vinícius Pinheiro, commented that "the crisis has exacerbated existing vulnerabilities and inequalities. In addition to the specter of unemployment, informality, low social protection coverage, and the lack of written contracts in many cases prevent them from accessing the aid established by governments".

ECLAC Executive Secretary Alicia Bárcena stressed the importance of paid domestic work as a critical sector of the region's care economy and underscored its fundamental contribution to the sustainability of life and the reactivation of the economy.

The health, social, and economic crisis triggered by the COVID-19, like the measures imposed in most countries, has meant an increase in the responsibility for the care and maintenance of households. Paid domestic workers occupy an essential place in response to the COVID-19 pandemic.

However, they are one of the leading groups affected by the crisis. Trade unions of domestic workers in some countries have reported that in certain situations, they have been forced to spend the night in their workplaces, staying away from their families and without adequate rest.

In other cases, contracts have been cancelled, and working time has been reduced, with a proportional reduction in pay. According to ILO estimates, 70.4 percent of domestic workers are affected by quarantine measures due to reduced economic activity, unemployment, reduced hours, or loss of wages.

Related News
22/06/2020
$name
02/11/2020
The Economic Impact of COVID-19 on Women in Latin America and the Caribbean
26/06/2020
Paraguayan craftswomen face the crisis with solidarity and self-management
26/06/2020
UN Women and SEGIB present study on discriminatory legislation on women's economic empowerment
25/06/2020
In Guatemala, investing in indigenous women’s economic empowerment is key to building back better after COVID-19
END_OF_DOCUMENT_TOKEN_TO_BE_REPLACED