Over 60% of children who are starting elementary school today will have jobs that do not exist today.

STEM careers are the jobs of the future. They have also been careers where women have been historically underrepresented. Some of the highest earning STEM occupations, such as computer science and engineering, have the lowest percentages of women workers. To foster sustainable development, drive innovation, social welfare and inclusive growth we need more women in STEM.

Giving women equal opportunities to develop and thrive in STEM careers helps reduce the gender wage gap, improves women's economic security, ensures a diverse and talented workforce, and avoids bias in these fields and in the products and services produced. 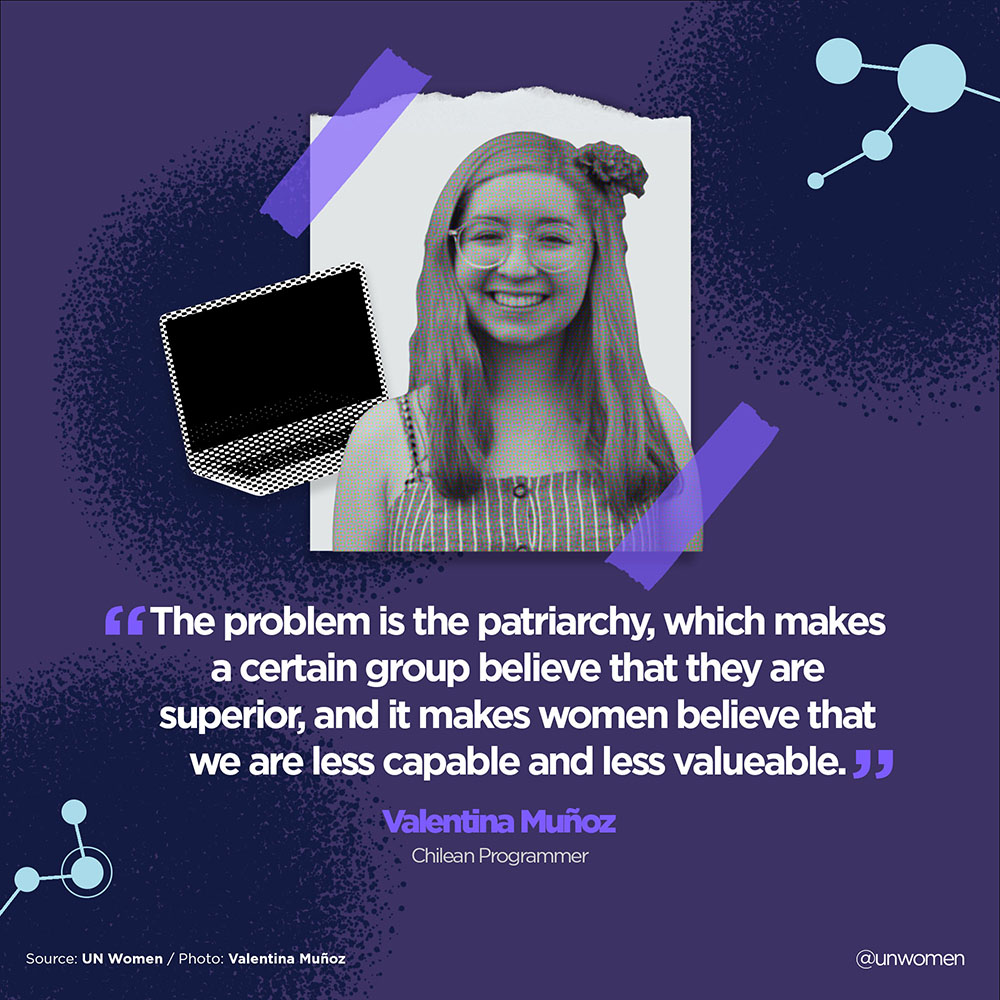 Valentina Muñoz Rabanal is a feminist youth activist, high school student. She has been a programmer since she was 12 years old; and three-time regional champion, national and world champion, of the First LEGO League international robotics competition. Elected by Ashoka as one of the 7 most influential young people in the country in 2020, this young woman is also the founder of the Secretariat for Gender Diversity and Sexuality of the Carmela Carvajal High School (Sedigesex); and president of the Association of Young Women for Ideas (AMUJI Chile). 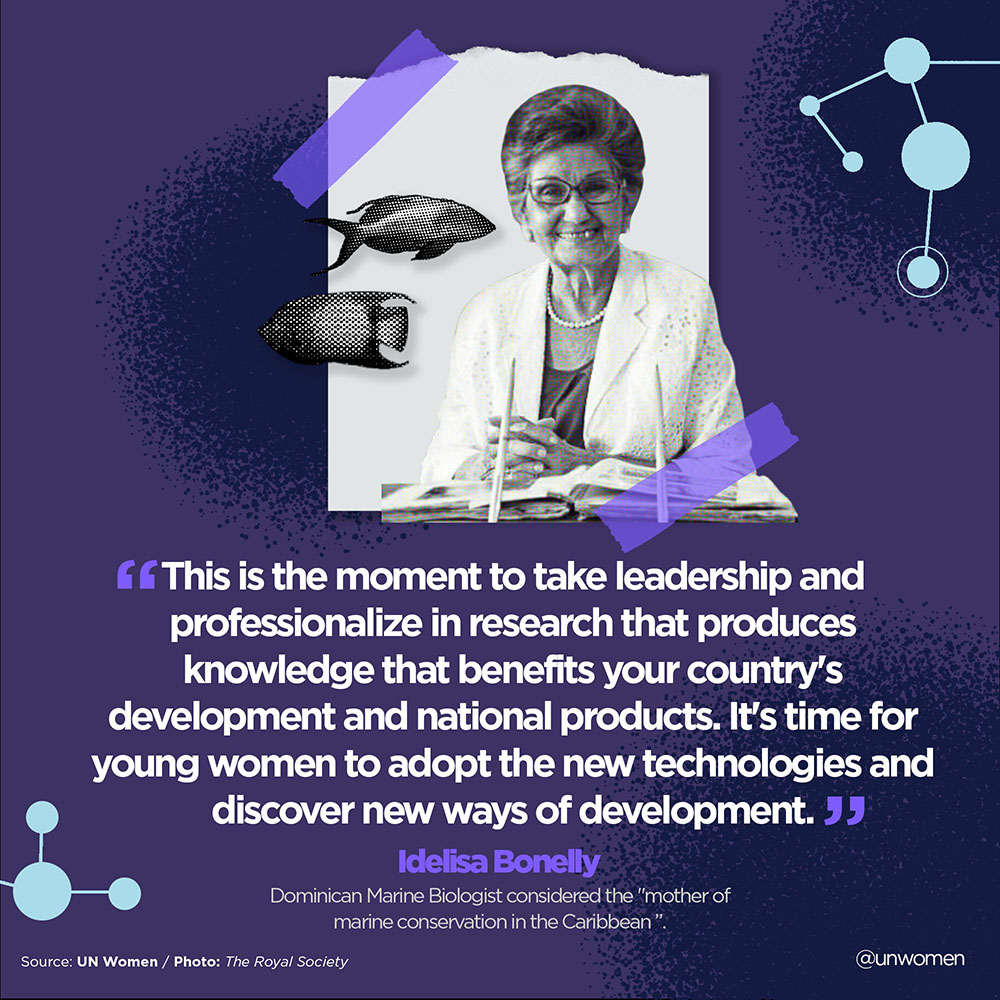 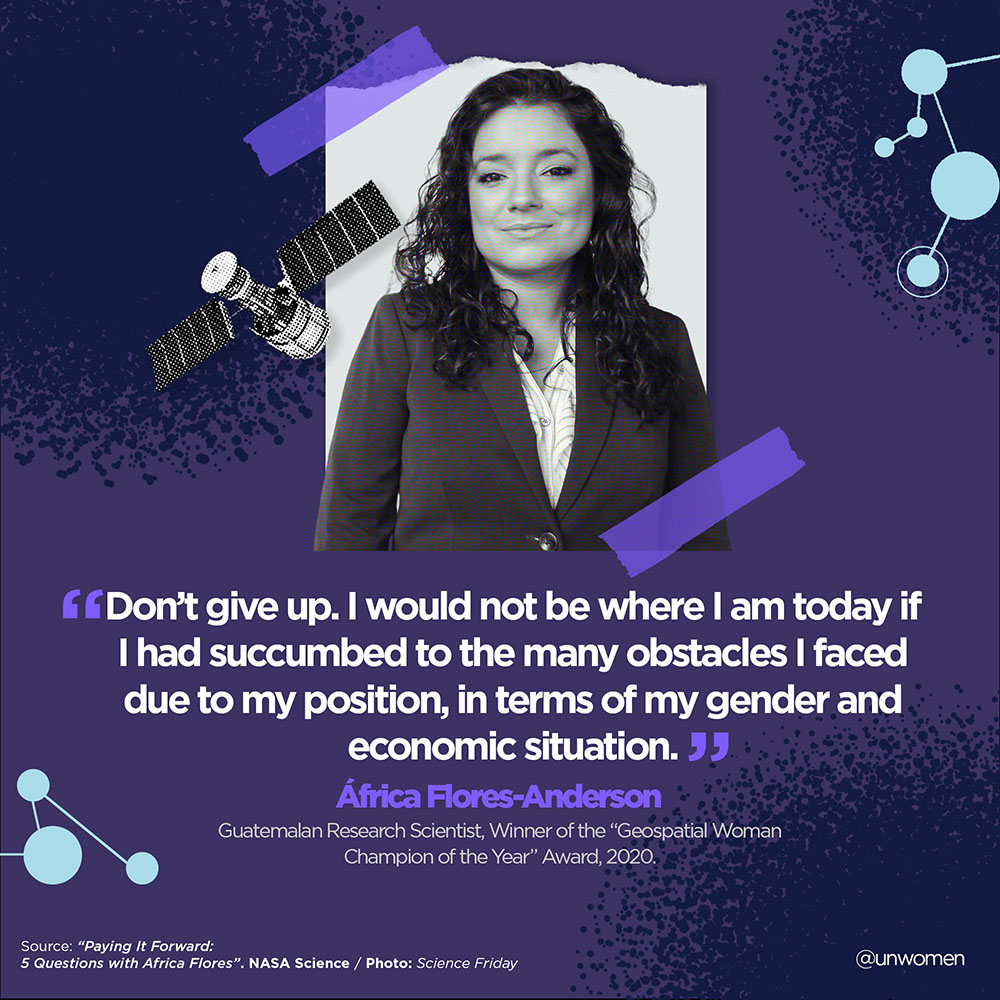 Guatemalan scientist África Flores monitors the health of ecosystems in different parts of the world through a network of NASA satellites. In 2020 she was the winner of the Geospatial Women Champion of the Year award, as regional coordinator of the National Aeronautics and Space Administration's SERVIR program, created to detect critical information related to food security, water resources, land use, natural disasters and climate change, especially in her country, Guatemala, and in countries of the Amazon. 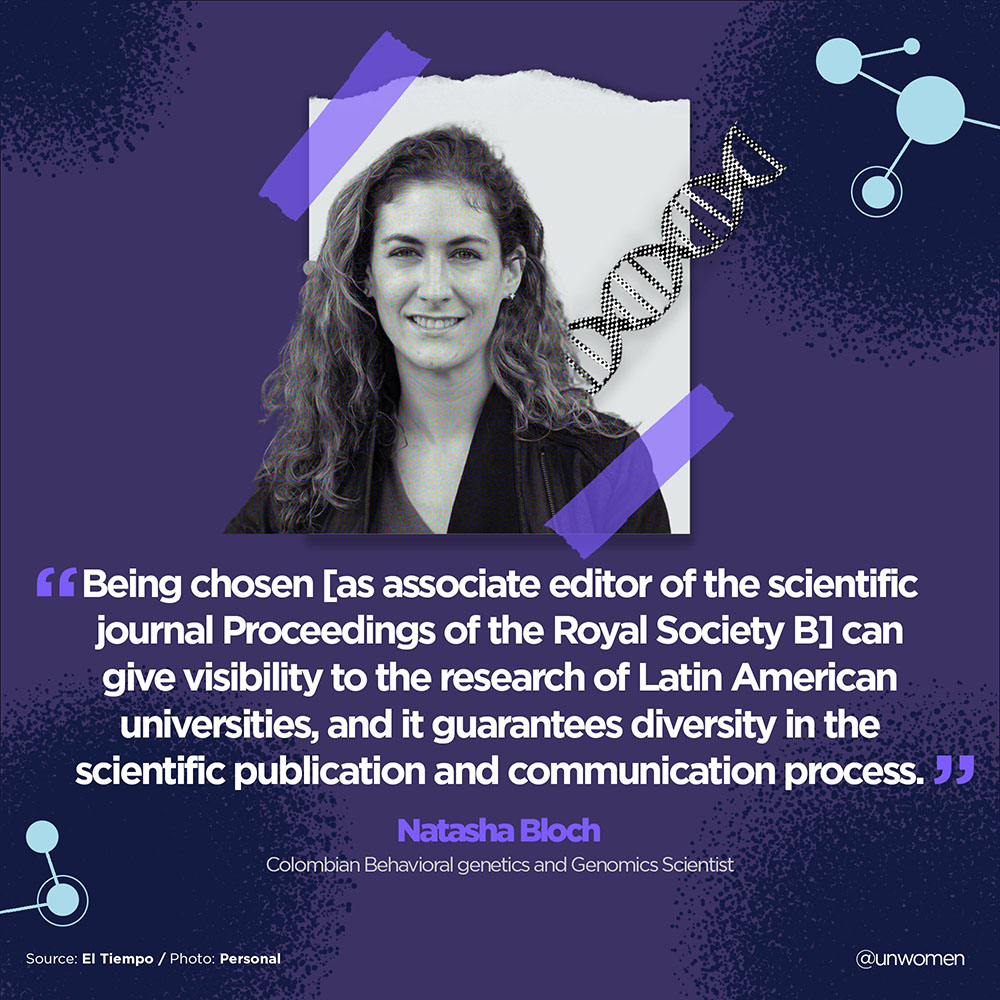 Named associate editor of the UK Royal Society's scientific journal Proceedings of the Royal Society B, Bloch's research focuses on understanding how our brains produce different behaviors to respond appropriately to myriad social stimuli, and the neurogenomic response that lies beneath social behaviors, their evolution and derived disorders. 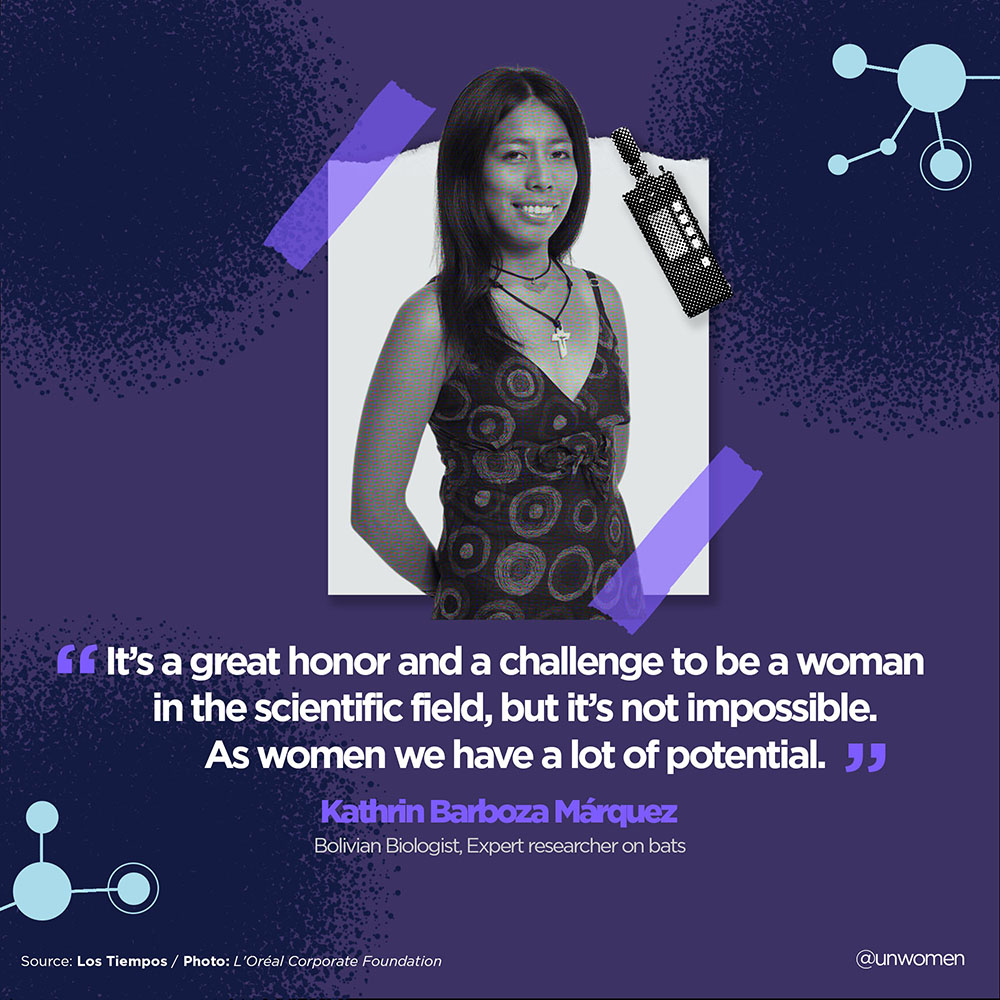 A researcher with the Bolivian Bat Conservation Program and the Latin American Network for Bat Conservation, Barboza is the first Bolivian scientist to win the Unesco and L'Oreal Foundation Fellowship for Young Scientists (2012). She rediscovered the Sword-nosed bat in Bolivia, which was thought to have been extinct for 72 years. Her research helped to expand knowledge about the environmental services that bats provide for human populations in different habitats. 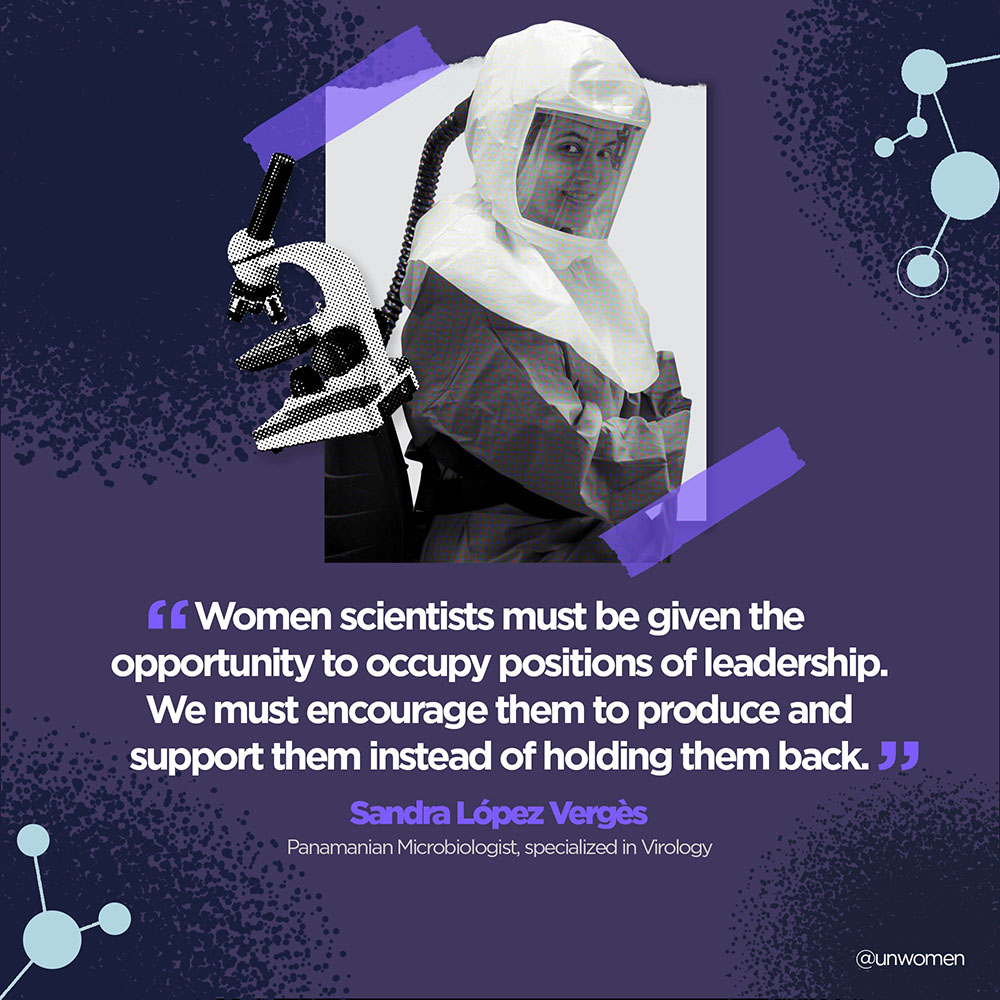 Sandra López Vergès is a Panamanian biochemist with a Ph.D. in Microbiology speciality Virology. She is a Senior Health Researcher and directs the Department of Research in Virology and Biotechnology at the Gorgas Memorial Institute of Health Studies (ICGES). She is developing a new line of research on innate immunity of viral and arboviral diseases, mentoring students at the PhD, master, bachelor and high school level. Her research and work has resulted in one patent and many publications in high impact journals and prestigious awards such as the UNESCO-L'OREAL International Fellowship for Young women in Science Award. 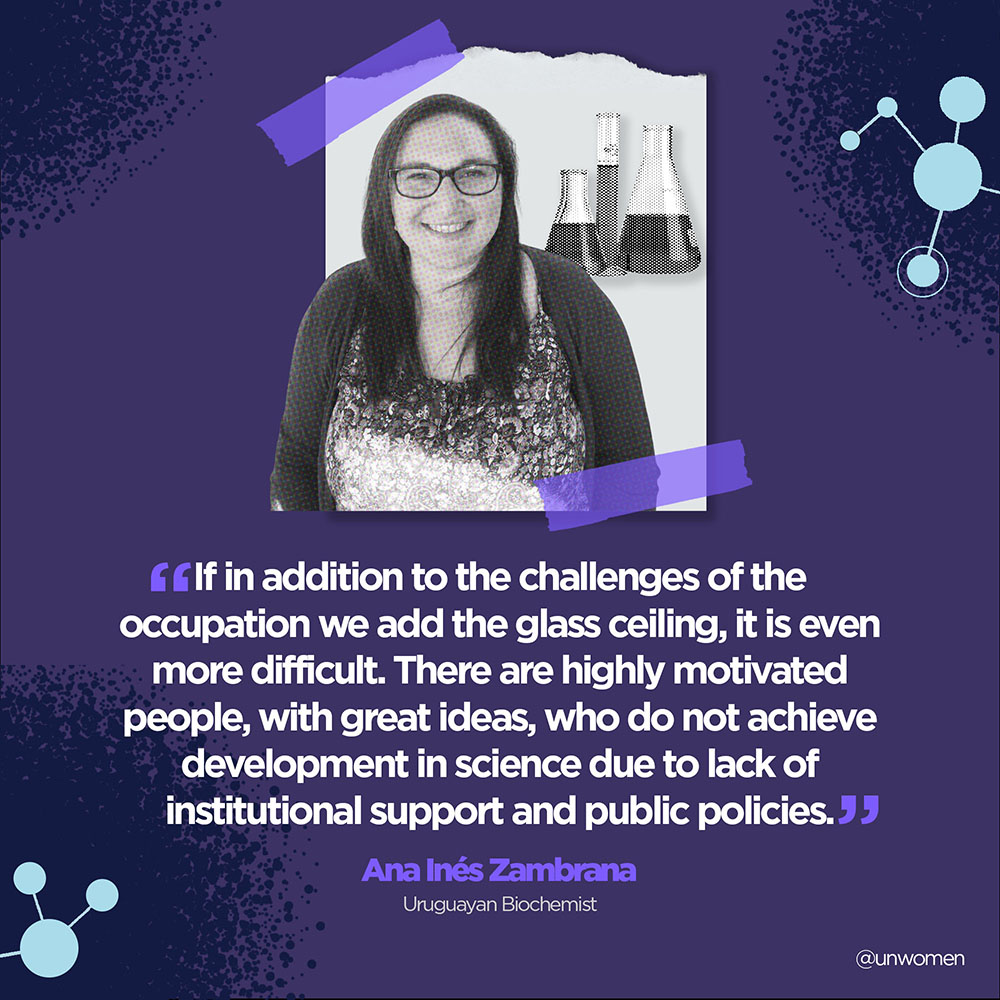 Ana Inés Zambrana has a degree in Biochemistry from the Universidad de la República and a Master's degree in Biology from the Program for the Development of Basic Sciences (PEDECIBA). She did her undergraduate thesis at the Biotechnology Department of the ETH Zürich Institute (Switzerland), where she researched transgenic rice, biofortified with iron. As for her Master's thesis, she investigated different aspects of type 1 diabetes and its impact on cardiac health (carried out at the Clemente Estable Biological Research Institute, Uruguay). She also completed a Diploma in Project Management for Cooperation (FLACSO-OEI) and specializations in Communication, Extension and Science Education.

Related News
14/09/2020
$name
10/03/2021
UN Women, ILO and ECLAC propose a "basic basket" to bridge the digital divide between men and women
11/02/2021
Take Five: "Women tend to be more inclusive and seek consensus, and in science these two things are very much needed to foster research and the development of human talent"
11/02/2021
Take Five: "Women scientists must be given the opportunity to lead"
08/02/2021
Commemorating the International Day of Women and Girls in Science: for more public policies
END_OF_DOCUMENT_TOKEN_TO_BE_REPLACED