Take Five: "Women scientists must be given the opportunity to lead"

Sandra López Vergès is a Panamanian biochemist with a Ph.D. in Microbiology speciality Virology. She is a Senior Health Researcher and directs the Department of Research in Virology and Biotechnology at the Gorgas Memorial Institute of Health Studies (ICGES). She is developing a new line of research on innate immunity of viral and arboviral diseases, mentoring students at the PhD, master, bachelor and high school level. Her research and work has resulted in one patent and many publications in high impact journals and prestigious awards such as the UNESCO-L'OREAL International Fellowship for Young women in Science Award. 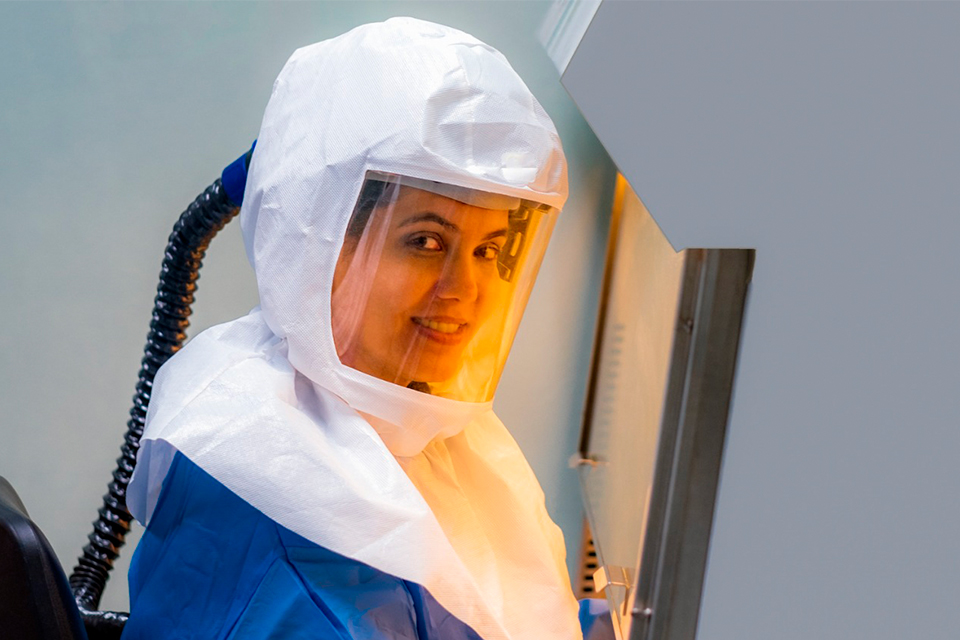 You have a history of working to advance gender equality in science at the national and regional level. Although there is still a lot of work to be done, what measures do you think should be a priority to advance in this direction?

The region has advanced a lot in terms of promotion in science; this must continue with models of women scientists or outstanding women in the different branches of STEM so that girls and adolescents continue to have references that show that it is possible to have a career in that area.

There are careers in science where there is low participation of women, such as certain areas in engineering, mathematics, and physics, but we cannot ignore the fact that there are careers in which women are entering, but not always completing their studies or going on to a doctorate.

I believe that the measures to be taken should be focused on how to retain them. It should be considered that in Latin America, after graduating from undergraduate studies, many people have to work to support their families. The ideal would be to have scholarships that allow them to study and be able to support their families economically, because otherwise many will abandon their studies for that reason.

Another aspect to consider is to provide childcare solutions, not only in the case of female teachers, but also for those students who require it. Issues such as flexible hours for those with family responsibilities are key in recognizing the quality of work, whose performance is measured based on results.

On the other hand, evaluation systems should be more balanced and reinsertion programs for young scientists should be contemplated, since we have observed that in many cases they abandon their studies in mid-career and this prevents them from accessing leadership ranks.

The goal must be to have true gender equality, not because of quotas, but because opportunities are really given to women and men. Just as we have to fight for gender equity, we cannot neglect other inequalities in science with vulnerable groups and populations.

Why do you think it is so important to promote a science diplomacy strategy in Panama and the region?

The great challenges of both the 20th and 21st century that we did not always acknowledge are global and regional challenges. The more scientific information we have at the regional level, the better chances we have to develop a strategy to address those challenges.

Many problems do not stop at borders. The pandemic is a good example, but it is not the only one. Science diplomacy is crucial to respond to regional problems and is key to the representation of the region in global discussions.

In those global arenas where issues that have a direct impact on development are discussed, those countries that have a solid scientific, technological and innovation system are able to have a greater impact, represented by a multidisciplinary team that contributes to diplomatic, scientific and economic issues.

In the case of countries such as ours, since we do not have enough experts, we cannot always be creators of proposals or producers of innovation, but rather we are followers of groups that can exert political and economic pressures.

Science diplomacy allows us to confront this through the creation of regional strategies. It is crucial for the sustainable development of both each country and the region and we have seen how it has helped to reduce tensions between countries.

At the Gorgas Memorial Institute, you lead the virology and biotechnology research team. In the context in which we are currently, what new challenges do you have and how do you face them?

The biggest challenge has been dealing with the large amount of work that we, as well as all the health and security staff, have had, especially under time pressure. I have been fortunate to have a good team and the help of all the Gorgas staff that has enabled me to meet the challenges that have been presented to us. On a personal level this was combined with changing the academic arrangement to virtual mode for my children.

The response part of the COVID-19 diagnostic required decentralization at the national level, which has not yet been finalized. There was an organizational component that involved a heavy administrative part, especially to ensure that we had enough reagents.

There was also the motivational part, as this work had a strong impact on all our families. As we did not know how long the crisis would last, some colleagues had to leave their babies with their grandparents and did not see them for a period of two or three months, which was made even more difficult by the quarantine and the heavy workload.

We are now focused on picking up those things we left pending at the beginning of the pandemic, keyed to my role as a researcher and mentor. As the laboratories and my time were 100% dedicated to COVID-19, all the projects that were being developed were stopped. I have had to do COVID-19 research in tandem with the COVID-19 contingency response.

The stereotype is often perpetuated that girls are not smart enough to perform in STEM or that boys have a greater affinity for it. What do you think can be done to reverse this?

One should start by preventing the stereotype from being perpetuated in textbooks. In all school literature, both genders should be represented in images that refer to mathematics, science and technology.

When discussing scientific history, all discoveries made possible by both genders should be addressed. The issue of gender inequality that has persisted in these disciplines should also be taught, especially in the case of female researchers whose achievements were made invisible for a very long time and in cases where their work was stolen by a man.

We must show girls that we are half of the population and that all human history was written by both women and men. We must support teaches in eliminating gender stereotypes in the games, colors and examples that are used.

Why do you think it is important to strengthen the empowerment of women in science?

The empowerment of women in science should be seen from a more holistic perspective.

It is key to recognize the leadership of women in science. We must ensure that women have the same opportunities as men to access leadership positions, ignoring gender-specific criticisms.

In Panama, the number of full-time female researchers has increased from 30% to 40%, however, this decreases at the distinction levels, where there are fewer women than men. There are also fewer women at the production level.

Women scientists must be given the opportunity to occupy leadership positions. We must let them produce with the impact they seek and support them, instead of holding them back.

One skill that must be cultivated in young women in their careers is the capacity for scientific leadership. This implies having the tools to make the work visible without being pretentious. It is always necessary to recognize that work in science is a team effort and that we all contribute something valuable, from the student who is just starting out. The way a female researcher presents her results is sometimes less assertive than her male colleagues.

At the regional level, we should begin by recognizing scientific work because we have highly qualified human resources. Salaries should be better in general, both for women and men. Gender should only be taken into consideration when talking about inequalities and equalizing opportunities.

If you want to learn more about the barriers that lead to gender gaps in STEM in the region, we offer you the study Women in Science, Technology, Engineering and Mathematics in Latin America and the Caribbean. The document presents an analysis of national policies and plans/programs designed to reduce disparities between men and women, giving visibility to successful initiatives implemented to attract more girls and young women to the STEM field and analyzes the pending challenges in the perspective of a greater representation of women in the jobs of the future and in the Fourth Industrial Revolution.

Related News
10/03/2021
UN Women, ILO and ECLAC propose a "basic basket" to bridge the digital divide between men and women
11/02/2021
Take Five: "Women tend to be more inclusive and seek consensus, and in science these two things are very much needed to foster research and the development of human talent"
09/02/2021
Latin American Women in Science and Technology
14/09/2020
$name
13/08/2020
$name
END_OF_DOCUMENT_TOKEN_TO_BE_REPLACED