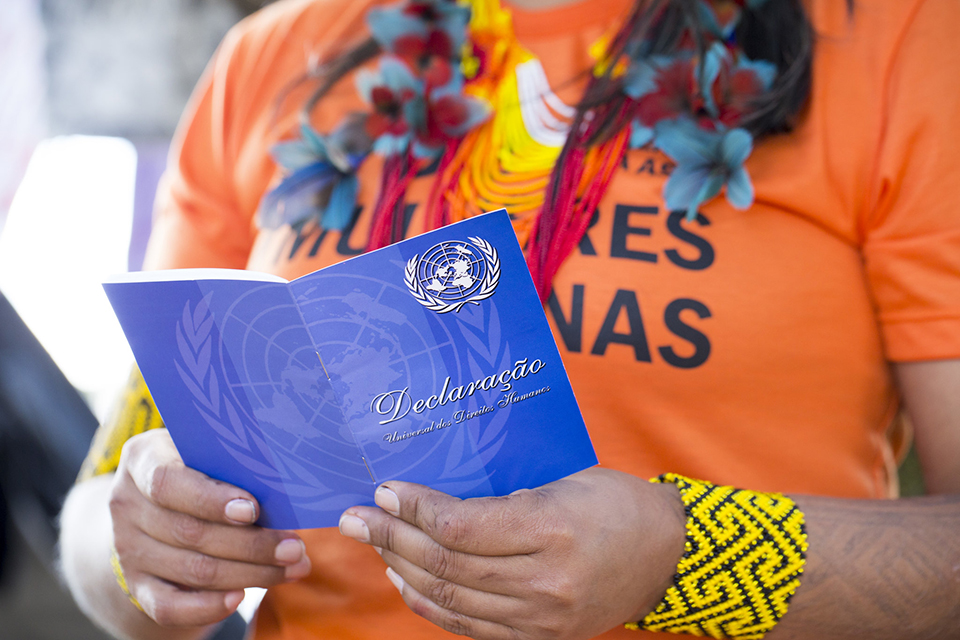 The UN Human Rights Offices for South America and UN Women for the Americas and the Caribbean have received with concern information from affected leaders about the March 25 attack on the headquarters of the Munduruku Wakoborûn Women's Association in the city of Jacareacanga, in the southwestern state of Pará.

Reports of attacks against human rights defenders are increasingly frequent in the country, especially against indigenous leaders. Likewise, reports of invasions of indigenous lands are increasing in the country, especially during the COVID-19 pandemic. Mining on indigenous lands - as proposed in Bill 191/2020 - and reduced enforcement of environmental laws that have led to an increase in illegal mining, generate a direct negative impact on indigenous peoples' ways of life, including their culture, food and health, especially on the rights of women, girls and boys.

Indigenous women have been in the front line of defense of their territories and the human rights of their peoples and for that reason have been especially subject to threats, intimidation, criminalization attempts, among other forms of violence. In this sense, it is representative that the indigenous women's association Munduruku has been the target of this attack.

"We have observed with concern what has been happening in terms of threats and violence suffered by women human rights defenders. At UN Women, we pay special attention to the different types of threats faced by men and women working in the defense of human rights. In the case of women, in addition to physical and death threats, we often see attacks on their dignity, including assaults and threats that lead to sexual violence," said María Noel Vaeza, UN Women Regional Director for the Americas and the Caribbean.

Attacks such as the one against the headquarters of the Munduruku Wakoborûn Women's Association are often announced in advance. However, the efforts of the State, at its different levels, have not been sufficient or effective in preventing them. It is necessary to prevent the invasion of territories by curbing illegal practices and to protect the physical integrity of the Munduruku people.

"In expressing our solidarity with the Munduruku indigenous people, we urge Brazilian State institutions to protect indigenous peoples against invasions of their territories and ensure that human rights defenders can continue to do their important work," said Jan Jarab, UN Human Rights Representative for South America.

The UN Human Rights Offices in South America and UN Women for the Americas and the Caribbean urge the Brazilian State to urgently adopt effective measures to protect the rights to health, life and personal integrity of the Munduruku people and to hold the agents involved in the recent attack accountable, reiterating that there is no place for violence and invasions of indigenous lands, especially during the serious health crisis affecting the country.

Pamela Ogando, UN Women Regional Office for the Americas and the Caribbean: pamela.ogando@unwomen.org

Related News
11/03/2022
Patrícia Santos Turning challenges into opportunities for women mangaba collectors in Brazil
15/03/2021
Women in Leadership: Drivers of Transformative Change for Human Rights and Gender Equality
08/03/2021
Take Five: “When I realized that working with human rights could make a difference in women’s and entire communities’ lives, my law degree started to make sense”
24/08/2020
$name
28/04/2020
Shortage of food and water challenge the prevention of the Coronavirus in Brazil’s largest indigenous reserve
END_OF_DOCUMENT_TOKEN_TO_BE_REPLACED