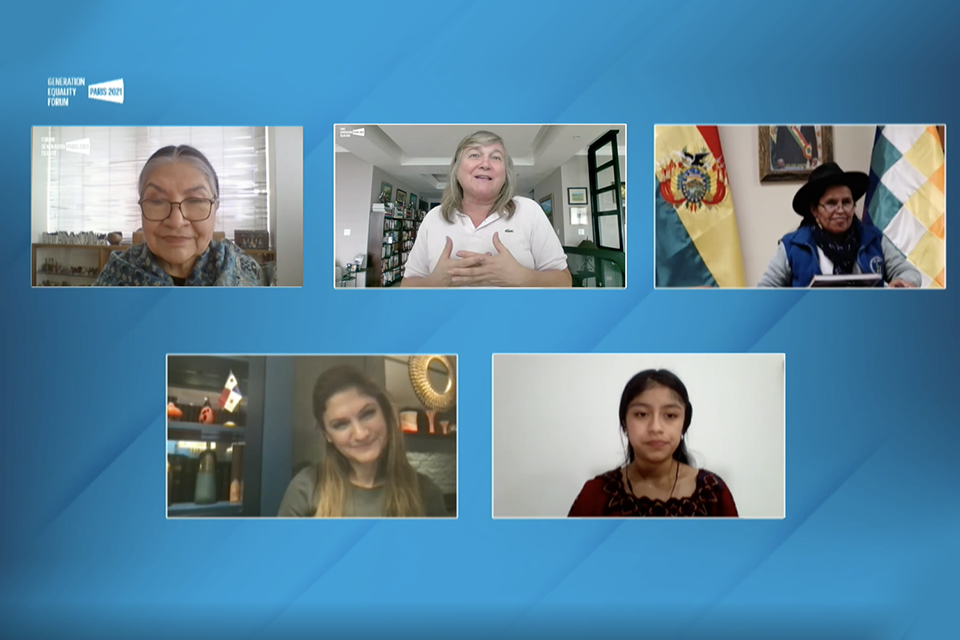 July 1, 2021. Indigenous women leaders from Latin America and the Caribbean demanded this Thursday to the governments of the region concrete and immediate actions to face the crisis generated by COVID-19, which disproportionately affects native populations.

The call was made in the framework of the Generation Equality Forum, a global summit promoted by UN Women and the governments of France and Mexico, and in alliance with civil society, which is being held this week virtually in France and where firm commitments have been announced to promote gender equality around the world.

The event "Crisis and Opportunities: Indigenous Women Facing the Pandemic" featured the participation of María Noel Vaeza, UN Women Regional Director for the Americas and the Caribbean; Sabina Orellana, Minister of Cultures, Decolonization and Depatriarchalization of Bolivia; Erika Mouynes, Minister of Foreign Affairs of Panama; and Yeleny Melody Juárez, indigenous activist from Guatemala; under the moderation of Tarcila Rivera, President of Chirapaq, Coordinator of the Continental Network of Indigenous Women of the Americas (ECMIA) and Executive President of the International Indigenous Women's Forum (FIMI).

Before COVID-19, over 23 million indigenous women and girls in the region faced discrimination and unequal access to education, work, land and participation. As María Noel Vaeza stated, "the pandemic has not created inequality in the region, but it has deepened it. We are facing intersectional discrimination." Emphasizing the deepening of these inequalities and the repercussions of the pandemic. Vaeza stressed that in this context "other rights violations are added, such as lack of access to comprehensive health services, including sexual and reproductive health, structural discrimination and violence, both on the basis of gender and ethnicity."

Indigenous peoples have used their knowledge to address these barriers, which Minister Orellana explains, "Mother Earth gives you the medicines to fight diseases, we indigenous women know this, and we use it to take care of our communities." Furthermore, they have also encountered other barriers in accessing protective services, including social protection and care services, access to justice, education and decent employment.

Minister Erika Mouynes stated that "the pandemic is a crisis that evidences what we already knew, but it gives us an extraordinary opportunity to do things differently. We need to make women visible; we need to take significant responsibility for their empowerment."

It is estimated that there are 58 million indigenous people in Latin America and the Caribbean, approximately 9.8% of the region's population, although this proportion is much higher in countries such as Bolivia, Ecuador, Guatemala, Mexico and Peru.

Belonging to over 800 different indigenous peoples, the approximately 28 million indigenous women and girls face various types of challenges, barriers and opportunities in contexts as different as the jungles of Central America, the mountains of the Andes or urban contexts, where more than half of the region's indigenous population lives.

In the final panel, the participants expressed various necessary commitments for achieving substantive progress in response to the demands of indigenous women. At the same time, they advocated for better public policies in favor of indigenous women and for their inclusion in negotiation and decision-making processes. "Our governments and decision-makers need to accept that many times indigenous women are the breadwinners of their families, so they must be included in public plans and policies," said young Guatemalan activist Yeleny Juárez. Along the same lines, moderator Tarcila Rivera, in her closing remarks, said that states should "contribute to the development of indigenous women so that they can be part of the solution to the impact of the pandemic.

The participants also advocated for the necessary resources to be allocated to programs and projects that promote gender equality and for the empowerment of all women, including indigenous women, to become a reality in this generation.