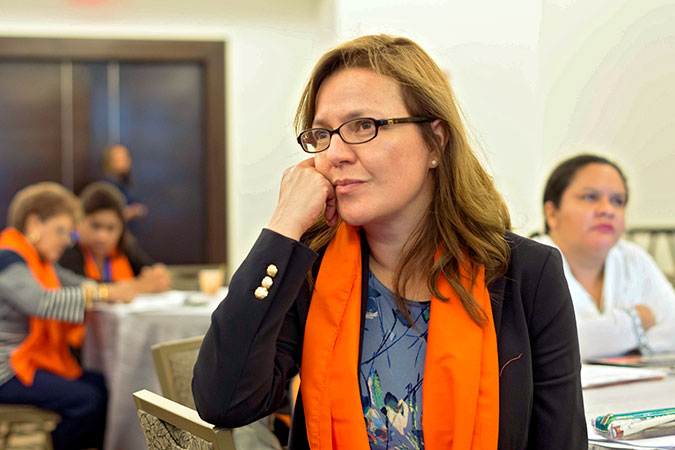 Latin America is seeing a wave of powerful protests against gender-related killings. As women and men demand #NiUnaMas (not one more women shall be killed), Adriana Quiñones, UN Women´s Country Representative in Guatemala talks about regional initiatives to prevent femicide. She was formerly the Regional Advisor on ending violence against women in Latin America and the Caribbean.

Is femicide happening in the region more than in other parts of the world?

We don’t have comparable data on femicide at a global level. The data we have comes from the 2016 Small Arms Survey gendered analysis on violent deaths, which tells us that among the 25 countries with the highest rates of femicide in the world, 14 are from Latin America and the Caribbean. What it doesn't tell us, however, is that there is a problem with proper investigation and recognition of the issue in many countries. Much of the data that is collected on homicides is not disaggregated by sex. This means that worldwide far too many killings of women are still not accounted for.

Latin America, in turn, has paid special attention to femicide ever since the Juarez murders begun in the 1990s. In the Mexican border town of Juarez, an unprecedented number of women were killed and their bodies showed clear signs of torture. The deadly hate crimes were a wake-up call for Latin America and the region started looking into the systematic killing of women.

What causes the deadly violence against women in Latin America?

Gender-related killings are the last act—a culmination—in a series of violent acts. People often fail to recognize the deadly chain of events that lead to femicide. An abusive relationship doesn’t start with murder, but the abuse escalates and without timely intervention and support, the women may end up murdered. In Latin America, we have a culture of high tolerance towards violence against women and girls. You see it in the media all the time—crimes against women are exhibited with very crude images and nobody seems to care about it. Violence becomes normalized; it is seen as a part of life for women.

In some countries of the region, the domestic violence rates are as high as 50 per cent [1]. But violence against women also happens on the bus, in the streets and in the workplace. We know that women often do not report violence, but even when they do, many crimes against women are not thoroughly investigated.

In 2014, UN Women and the Office of the High Commissioner of Human Rights launched the Latin American Model Protocol for the investigation of gender-related killings of women. It was developed in a 2-year participatory process, consulting experts from the region and all over the world. What is this Protocol all about?

The Model Protocol is a tool for the police, courts, officials in the justice systems and forensic doctors to properly investigate femicide. It begins by defining hate crimes against women and how they need to be investigated and prosecuted. That means, first and foremost, understanding and recognizing the history of violence that led to the femicide.

When a woman is found murdered at home and you start asking questions about the history of violence in that household, often you may find out that she had gone to the police, or that she had sought medical care, but nobody had put all of the pieces together to establish the risk that this person was exposed to. Worldwide, almost 1 in 2 murdered women was killed by her partner or ex-partner in 2012. This ratio is 1 in 20 for men [2].

The Protocol clearly explains that it is the duty of the state to protect women and this means: sanctions, prevention and proper reparations. It helps the authorities understand their responsibilities in addressing violence against women and also seeks to include the rights of victims—meaning, the living relatives of murdered women who seek justice.

What is UN Women doing against femicide in Latin America?

Passing the legislation and understanding that femicides are hate crimes, already opens up a space for discussion and creates awareness. We see that more cases are being made public, people are talking about the issue and women are marching to protest in the streets.

In the region, UN Women assists in the collection of comparable statistics and facilitates the exchange of experiences, challenges and good practices between countries that have already adopted the protocol and countries that are still in the process.

What is needed to end femicide in the region and beyond?

Ending impunity is critical and the Model Protocol is the first step towards that.

We need comparable statistics to analyze and compare between countries what works and what doesn´t to end femicide. When we have better statistics, we can see the patterns and the gravity of the situation, and make informed policies.

We also need a big emphasis on prevention because we can put all the aggressors in jail, but if we don't change the structural causes, the attitudes and perceptions that drive violence against women, we're never going to end it. Colombia, for instance, passed legislation in 2015 that engages the education sector in prevention activities. In pre-, middle and high schools, children are now studying what gender means and how it affects our societies.

We need integrated and high quality services that women can trust. Understanding that femicide is the ultimate act in a chain of acts of violence against women, means understanding that health sector, social services, the police and the justice sectors must work together.

Uruguay has implemented a successful pilot project with courts, the police and the women’s ministry. In a high-risk situation, a judge can ordain the abuser to wear electronic bands connected to an electronic device that the woman at risk carries. If the abuser comes close to her, the device alerts the police automatically. While in the programme, both also receive psychological support. So far, not a single one of the women in this programme have been killed.

[1] Pan American Health Organization and Centers for Disease Control and Prevention (2012). Violence Against Women in Latin America and the Caribbean: A comparative analysis of population-based data from 12 countries. Available from http://www1.paho.org/hq/dmdocuments/violence-against-women-lac.pdf

Related News
26/11/2020
UN calls for "zero tolerance" policies on violence against women and increased funding for women's organizations
05/11/2020
The pandemic’s impact due to COVID-19 on violence against women
08/07/2020
#GetInvolved so we can prevent femicide
08/05/2020
$name
30/05/2019
Coverage: UN Women Executive Director Visits Mexico for the launch of the Spotlight Initiative
END_OF_DOCUMENT_TOKEN_TO_BE_REPLACED