Dalia Bolaños Pascal is part of the Indigenous Unity of the Awá People. At 21 years of age, she is the alternate Governor of the El Verde estate of the Gran Sábalo reservation in Nariño. A position that has historically been occupied by men. 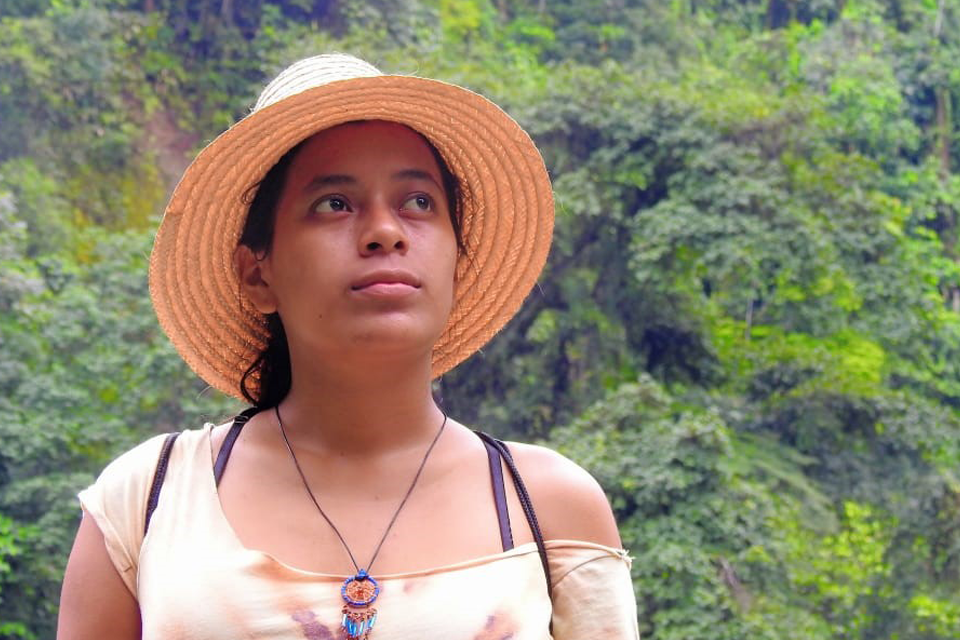 Being a young woman, a social leader, a human rights defender and a governor is an example of gender equality and access to opportunities as well as an affirmative action from the indigenous worldview. Dalia is the first alternate governor of the El Verde estate, one of the 25 communities of the Gran Sábalo reserve located in the department of Nariño, in southern Colombia.

For her and her people, the fact that a woman is at the helm of such an important position surprised everyone, as these spaces have always been occupied by men. But Dalia has had the task of connecting her community. For over four years she has been able to bring to her people and all her women concrete information on everything related to gender-based violence in the Awa-pit language, therefore, her work is not unknown, since it was her own community and all her female colleagues who rallied for her.

In Dalia's words: "it is an achievement to be able to provide accurate information to all women", since many of them, due to the remoteness of the communities, do not speak Spanish and cannot have access to information.

In her work as a leader, she also produced radio content in her native language within the network of community radio stations in her territory, providing information to women about their rights and the importance of their participation in decision-making scenarios, strengthening their empowerment. Additionally, she has worked hand in hand with the Women and Family Council of her town, which has allowed her work to be reflected in the community and in all the women who are part of it. Her voice is heard throughout the Resguardo.

Dalia represents many young women who, like her, have sung the song of peace.

"For me it is very important that women participate in decision making processes, especially now because of the pandemic, and that is why, through my work, being able to translate content into our native language, all of them can learn more about their rights and rest asured that the participation of women is not something unknown or negative, but the chance to claim our rights and have the same opportunities as men," says Dalia.

Her task as governor has not been easy, as she has had to act during the pandemic. This has forced her to make concrete decisions that would benefit her community and to not give up on her journey from the Resguardo to the municipal capital to safeguard the lives of the people.

The road has been tough at times, but she has sought ways to continue connecting women. Her work as a defender of rights is unstoppable, she is hopeful that she can continue to ensure the safety of women and the search for opportunities for her people, this has made her figure public, not only within her community, but within social organizations and institutions.

She has seized the opportunity to connect with other women leaders and human rights defenders through the ProDefensoras initiative in the project “Developing capacities in women's organizations and processes in the department of Nariño for the strengthening of prevention and protection measures with a gender and ethnic approach'.

Through this project, developed by the Consultancy for Human Rights and Displacement implemented in the framework of the ProDefensoras initiative, led by UN Women, the Norwegian Embassy in coordination with the Ombudsman's Office, Dalia has managed to provide, from her leadership, training spaces for women in her town, a strategy that has also allowed her to advance with her community in self-protection plans for women leaders and thus contribute to the reduction of violence against human rights defenders.


ProDefensoras is benefiting more than 3,000 Colombian women leaders. Dalia says that this initiative has encouraged her to work for her people.

"I dream of my people being happy, like they used to be, as our grandmothers once told us they were, not only before the pandemic, but also when there was no war. I feel that I must continue defending the rights of women, that is my work, the defense of my territory, of our ancestral practices, because we are water that cleanses and flows, we are air that comforts. In our Resguardo we are ProDefensoras".

Dalia carries with her a message for all young women: to raise their voices in favor of their people because peace, freedom and life depend on them.

Related News
09/08/2021
Desde mi perspectiva: “Las mujeres indígenas estamos tomando las riendas de nuestras comunidades”
16/03/2021
Women in leadership: Juana Facundo, breaking language barriers to respond to the COVID-19 pandemic in indigenous peoples
17/08/2020
From where I stand: “Together, we are building peace and equal rights in our territories”
15/08/2018
$name
01/08/2018
In the words of: “People voted for me because they wanted to see change”
END_OF_DOCUMENT_TOKEN_TO_BE_REPLACED