Women in leadership: Beatriz Argimón, "I will not allow the naysayers or those who want us to regress in our rights to advance.” 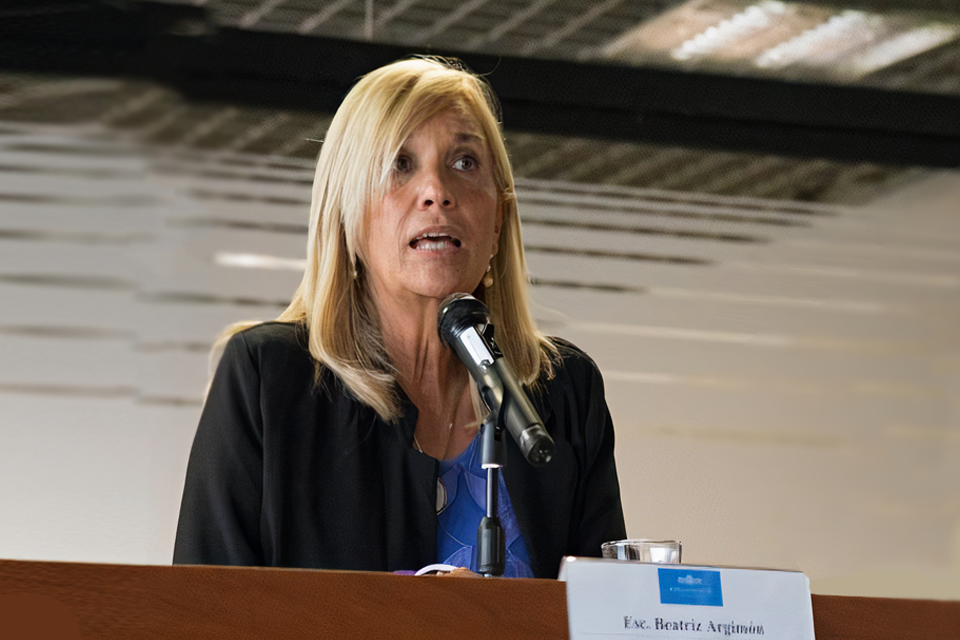 Photo: Department of photography of the Parliament of Uruguay

What inspired you to work in politics?

I was 17 years old when the military dictatorship removed my father from public office. At home, of course, they talked about politics, and I decided that since there were already movements of young people who tried to get together as best they could, to interact in order to accompany everything that meant the reestablishment of democracy, that's when I started to get involved and that went in crescendo.

As time went by, that militancy started to define me in terms of the fact that I wanted to be a political woman... at some point I understood that in order to follow all those issues that interested me, to propose things, to work, to make them visible, I had to be part of the system in the places where decisions were made and that is what led me to become a political woman.

What support did you have?

Without family support it would have been very difficult, because when I started, I was very young, and there were not many women with political leadership, determined to be women politicians. In all the parties, from the very beginning, women were always art and part of the party. However, the desire to be a "political actor" was not being encouraged. And yes, without family support I would not have been able to do it (...) I always say that I graduated in 1989, I already had my eldest daughter, Belén, a little girl. I graduated in July and when I arrived home, with the joy of my parents for the news that I had graduated, I told them: "In November I am a candidate for mayor!" Of course, historical perspective, when you are a mother, you understand the face with which my parents looked at me, they did not understand that I had just graduated, for me, the other announcement was very important. Undoubtedly, I had family support and from very early on they accompanied me in the decision I made.

What unique opportunity does this position give you?

I am convinced that visualizing women in different decision-making positions is a cultural battle, and that is not a minor issue. This entails, at least for me, having an additional responsibility. You must not forget that you are also opening spaces for those who come and want to, so one cannot lose sight of the fact that this also has to be a task. Many of the things I try to do are aligned with the fact that women have a different agenda when we arrive, such as not forgetting to be instrumental opening doors for other women; always being in contact with young women to see how they visualize society allows me to follow through with the commitment.

How do you think your leadership impacts?

I don't know if it is a leadership. More than leadership, I have always been more interested in defining a feminine style of doing politics. I think I always tried to be very respectful, I always tried to practice what is generally in the speeches, that you have to listen to those who think differently, and you must convey what you think on a fundamental basis. It is to work with agreements, to look for what unites more than what separates... and that was something I cultivated throughout my political life. I don't understand the politics of grievances, I understand the politics of discussion with foundations.

What motivates you to move forward?

When you are part of a party, -in my case I am part of a party that as soon as you adhere, they tell you that you cannot lose sight of the fact that you are a public servant-, then you incorporate that concept and I really like making democracy better every day. It is not just about having democracy, but about improving the quality of that democracy every day, of the internal democracy of my party and of Uruguayan society. I am motivated to work every day so that we all able to fully exercise our rights regardless of whether we are women or men, race, gender, or religion. That’s what working for a better democracy means.

What achievement would you like to leave the vice presidency with?

And how do you think this would impact women's lives?

Legal frameworks take time in Uruguay; at least they take a long time, and it has been very difficult for us. That is why I think we should give a final push so that women are really in decision-making positions, where the countries’ policies are made, where they are carried out, where we go from the discussion to the execution.
In the 21st century, in a country like ours, with such a high rate of democratic adherence and where women have a high level of education, where we have such a significant participation in the composition of the GDP, in other words, we are everywhere, it is not possible that we are not being heard and that women are limited in terms of the contributions we can make in the construction of a country.

Why do you think there are not that many women leaders?

There is a cultural issue that is undeniable in Uruguay. It also depends on the timing. There are times when there are real impulses and there are other times when women look for places where they can effectively make their contributions and their work to productive ends much faster than in the system; that is why I think that this advance of women in the third level of government has a lot to do with the fact that they feel that what is produced by their political actions is felt quickly.

At the same time, they are much closer to the benefits for their community and especially for the younger ones, they have that balance of family and professional life, especially in the interior of the country.

Why do you think there are not that many women leaders?

There is a cultural issue that is undeniable in Uruguay. It also depends on the timing. There are times when there are real impulses and there are other times when women look for places where they can effectively make their contributions and their work to productive ends much faster than in the system; that is why I think that this advance of women in the third level of government has a lot to do with the fact that they feel that what is produced by their political actions is felt quickly.

At the same time, they are much closer to the benefits for their community and especially for the younger ones, they have that balance of family and professional life, especially in the interior of the country.

The paid and more visible levels in the third level of government are more disputed by men. Are women more disinterested?

Women are, yes, they are; with their desire to get things done, they do not care if this is an unpaid job, and I think we must start changing that, because we already do enough unpaid work.

The regulatory framework is in place, do you think society is ready for the changes?
The citizenry is much more advanced than the system. I remember when we did a survey prior to the first quota law that came out. There, society was much more willing and, to this day, in the polls they want there to be more women. In reality, the issue goes through the political-party structures. It is necessary to have this issue as a priority within the parties and it is necessary to renegotiate from the top.

It seems to me that women have had very relevant spaces in the context of COVID-19 and that they went out as always to be protagonists at the local level, in observing the care and those issues related to their environment. If it was necessary to cook in a popular pot, if it was necessary to make sure that everyone had a mask in their area, in their neighborhood, they went out to make masks, to cook, to take care... And there again were those who had telework, facing the care of the children inside the house, of the older ones because they were the main ones at risk. The women were the first in the containment.

What is your vision of the movement?

What do you think about the "gender ideology" hate speeches?

Well, I always clarify that I don't follow a gender ideology. I have always worked for gender rights and equal opportunity and gender identity. To use nicknames and things that visibilize an organized movement where they polarize the citizenry that sparks this whole process of confrontation is bad for everyone, but mainly for society.

In my militancy for women's rights, you will never see me making speeches that encourage hatred, but I will never allow the naysayers or those who want us to regress in our rights to advance.