Women in leadeship : Andrea Muñoz Sánchez, the Chilean Supreme Court Minister who promoted the gender office in the judiciary.

Andrea Muñoz Sánchez is a lawyer, she is 61 years old and was born in Valdivia, Chile. Since 2016 she has held the reins of the Chilean judiciary's gender office, ensuring equal treatment of both female officials and female users. 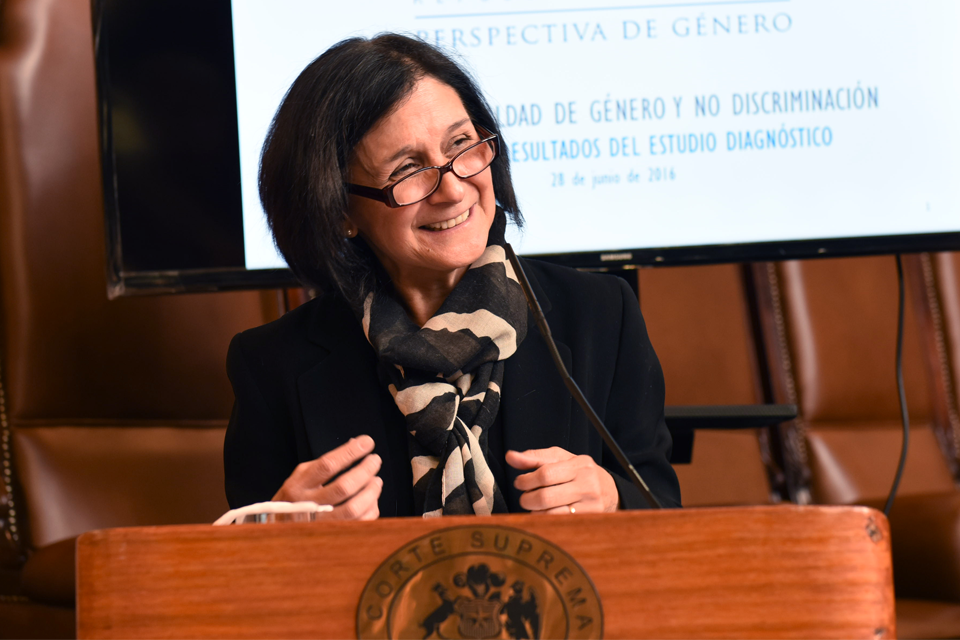 On February 16, 2021, Chilean Supreme Court Justice Andrea Muñoz Sánchez became the first woman to assume the presidency of the judiciary. Although it was only one day of subrogation, her appointment marked a milestone and a need to promote the leadership of women in this state body founded more than 200 years ago.

"I began to receive congratulations from my fellow women ministers from other supreme courts such as Mexico and Nicaragua, with whom I am on the gender commission of the Ibero-American Summit of Women Judges. I did not understand why it was so relevant, because for me it was a subrogancy to which I arrived due to circumstantial issues. After analyzing the situation, I realized the symbolic effect of seeing a woman occupying this position, but in any case I think that when the Plenary actually elects a woman as president of the Supreme Court, a historic milestone will have been reached".

The woman in charge of promoting gender equality and non-discrimination.

Since 2014, Minister Sanchez is the person in charge of promoting gender issues within the Judiciary. Her management in this position stands out for the institutionalization of a technical secretariat and a gender policy that saw the light after a revealing diagnosis carried out in 2016.

"The study revealed that 1 in 10 people had witnessed or experienced situations of harassment at different levels: catcalling, unwanted physical approaches, and uncomfortable propositions, among other things. I felt it was important to take on this challenge, and that it meant visibilizing the fact that this type of behavior was not acceptable within the organization."

This is how in 2017 the Technical Secretariat for Gender and Non-Discrimination of the Supreme Court of Justice of Chile was created, which under the direction of Minister Muñoz conducts studies for decision-making, enabling actions such as the implementation of the Gender and Non-Discrimination Policy, a document that embodies the commitment of the highest authorities of this branch of the State to move towards a model of justice that is increasingly inclusive and respectful of diversity, with a view to ensuring effective access to justice.

"We as the judiciary are committed to working to ensure full respect for equality. That is why from the policy four strategic axes, one of non-discrimination of gender, another of gender approach from the access of citizenship , and another of non-violence , these three axes are crossed by a fourth, which is training. This is an important issue if we want to generate a change within our institution".

Minister Muñoz recognizes that although the institutional regulations set a precedent, the work is much more profound: "Achieving gender equality implies a cultural change of behaviors that we as a society still have very much in place, and some behaviors are normalized. So the challenge is to visibilize the shortcomings and barriers that people have to access justice because of the fact that they are women".

Although women are the majority in the judiciary, the high positions are still represented by men, since the hierarchy is based on seniority. This is why the person in charge of gender issues motivates women who are just starting out to make a career in the judiciary to participate in these arenas so that in the future there will be more women who, due to their trajectory and permanence, will be able to apply for high positions.

"To the young women lawyers who today want to be judges and who may want to be part of the Supreme Court of Justice in the future, I tell them to dare not to be consumed by roles, stereotypes or glass ceilings, I invite them to work hard and not to minimize themselves.

The work of Minister Muñoz continues, now leading the National Advisory Council on Gender and Non-Discrimination of the Supreme Court of Justice, formed by Ministers of the Courts of Appeals, representatives of the Judicial Academy, the Administrative Corporation of the Judiciary, the Trade Associations and the Association of Chilean Women Judges. From there, it hopes to articulate and amplify the gender policy at the territorial level according to the particularities of each region.